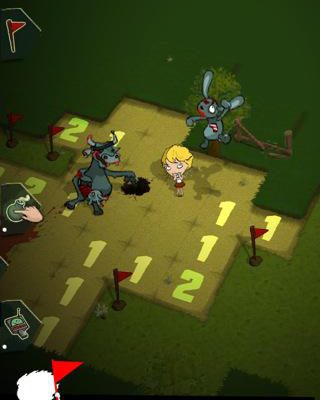 Zombie Minesweeper is a love story. With zombies. (That means it’s an awesome love story)

I’m not always the best boyfriend. I’m distant sometimes. Or I forget appointments. Or, sometimes, I say stupid things. However, I’m pretty certain that I’m a lot better than the boyfriend who appears in Zombie Minesweeper, the first iOS release from Frogtoss Games. Unlike this absentee paramour, I’m pretty certain that I’ve never done anything as stupid as convincing my girlfriend to walk across a zombie-infested county just so we can have a romantic weekend alone. That said, I guess I should be grateful that this guy managed to convince his girlfriend to do just that, because Zombie Minesweeper is one of the best games to appear on the platform.

Surprisingly, there’s actually a story here: “Girl” (who is actually unnamed in the game) is just trying to spend some romantic alone time with her boyfriend when the zombie apocalypse comes. Needless to say, this throws a monkey wrench into the couple’s plans, so they end up trying to meet up at a remote cabin in the woods.

Of course our heroine is pretty far away from the cabin, so she has to make her way through thirty different locations, all of which are teeming with animal zombies (on a side note: Girl should’ve dumped her boyfriend as soon as he suggested she take a shortcut through an animal graveyard). On top of this, Girl apparently lives in the most dangerous town ever, as there are landmines scattered all over the place; not only does she have to avoid the zombies, but the young woman has be careful where she steps or there won’t be enough pieces of her left to come back as a member of the undead. 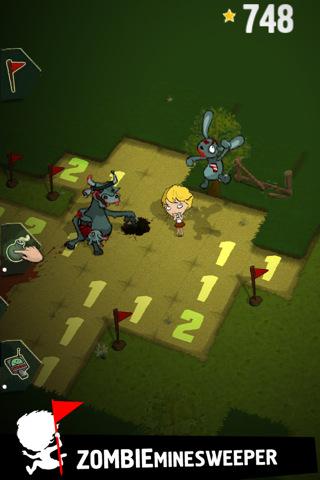 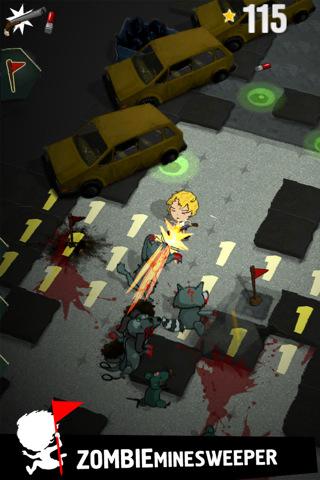 The core gameplay is actually pretty familiar to the Minesweeper games we all grew up with on the Windows operating system. Players tap on the screen to make Girl run around a map divided into a massive grid, as she moves, the terrain peels back, with certain squares revealing how many mines are adjacent to them. Once a player figures out where a mine is, they can plant a flag on its square, which nets them points at the end of the level.

Things get incredibly challenging when the zombies start clawing their way out of the ground and chasing after Girl; if she winds up within their reach, Girl is ripped to bloody shreds (seriously, the first time this happens it’s a little surprising). Normally it’s just a bit difficult to get past the zombies, but there are some corridors that are only one square wide, which means it’s actually impossible to get Girl past them without getting her killed.

There are a slew of different zombie types, and each moves at different speeds and in different ways. The snails crawl around pretty slowly, rabbits can cover large distances in a single hop, but hopping is all they can do. Cats, meanwhile, can move surprisingly quickly when they want to. You get the idea: depending on the zombies in a level, players are under varying amounts of pressure to keep Girl moving.

Thankfully, Girl isn’t completely defenseless against the shambling hordes. Each map contains mine detectors, brains (which can be placed to lure zombies away), shotgun shells, and bombs that can be used to give Girl some breathing room. This is actually a great idea, because it adds a frantic survival-action mechanic to the gameplay that works really well. 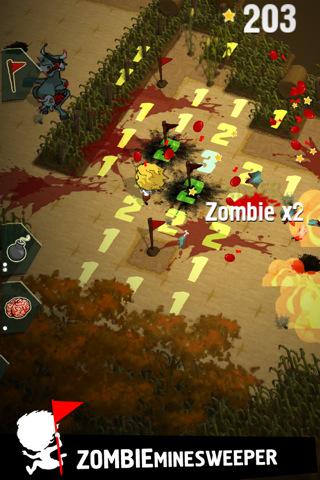 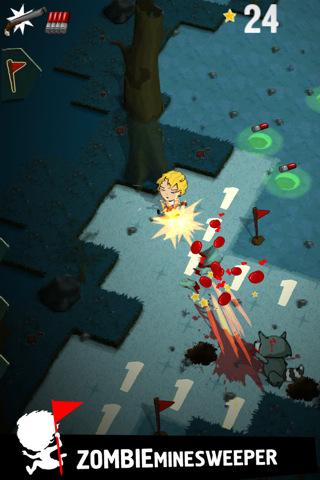 Aside from the quality gameplay, the production values here are absolutely stunning. The art is wonderfully cartoon-like and bright. There’s never any visual slowdown, either. On top of that, the environments are pretty varied, so things never feel old.

The sound, too, is really excellent. Sound effects are solid, and each zombie type makes notably different noises (usually screams for brains that can only be described as “adorable”). Additionally, the soundtrack (which you can buy on iTunes) is one of the best I’ve ever heard in an iOS game.

Zombie Minesweeper is one of those games that sounds like it might be stupid but winds up being stupidly fun. It’s adorable and strange and just violent enough to be goofily awesome. Between the crazy amount of awesome gameplay, the strong sense of humor that pops up throughout the narrative, and the amazing style, players will never want to go back to the original (bloodless) version of Minesweeper.