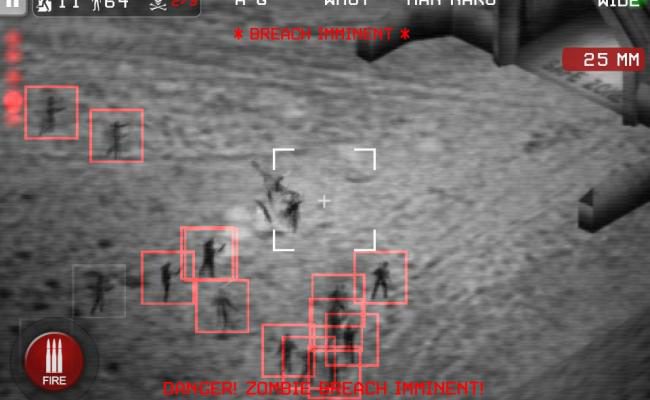 Zombie Gunship takes the zombie apocalypse to the skies

There’s very little that tops slaughtering a whole army of shambling zombies. But is it fun when you can deal that death – well, re-death – from way in the sky through a thermal camera? Zombie Gunship proposes yes, but whether you agree is a different story.

The short tutorial tells you everything you need to know: You’re slowly circling a bunker, trying to help civilians running from several canyons to get there while destroying the zombie hordes after them. If a zombie breaches the bunker, it will go into lockdown and the game ends. If you kill three civilians, you’re doing more harm than good and you’ll be pulled out of the field. 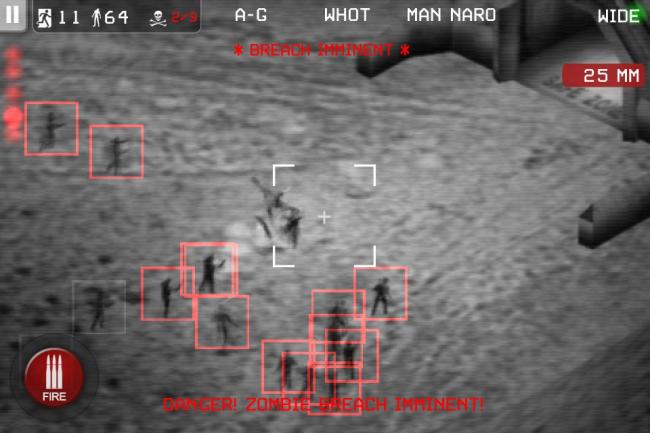 The zombies and people in Zombie Gunship are little more than black and white ants through a thermal camera. You’ll be able to earn three guns as you play, from a lowly Gatling gun to a giant shell. Each has different strength rating and damage area. The three guns have various levels of zoom, but you’ll still get a fixed view from your slowly-circling helicopter.

After each playthrough, you’ll earn coins for new weapons, upgrade for faster reloading or more power, as well as enhancements for radar and protection for the bunker. (Of course, in the spirit of good entrepreneurship, you can buy coins and avoid the whole “earning coins” thing.) Civilians are, of course, worth more than zombies.

In the Zombie Gunship graphics department, you’ll be seeing grainy, monochromatic images reminiscent of footage you’ve seen on the news or in the movies. While it’s easy to see the baddies (including some hulking larger zombies as you get further into the level), there’s not a lot of detail.

Where Zombie Gunship really shines is the sound design. The voice acting is hit and miss, but the guns… oh, those guns sound amazing. It turns out that the sound designer is the same person who produced the guns in the famous Gears of War series on the Xbox 360, which would explain why every “rat-a-tat!” and “kaboom!” resonates with aplomb. Really top notch stuff.

But all the sound in the world can’t change the fact that you have zero control over where you’re looking. Since you’re only the gunner of the helicopter and not its pilot, you’ll probably lose due to a zombie entering the bunker with no way for you to actually reposition yourself to kill it. 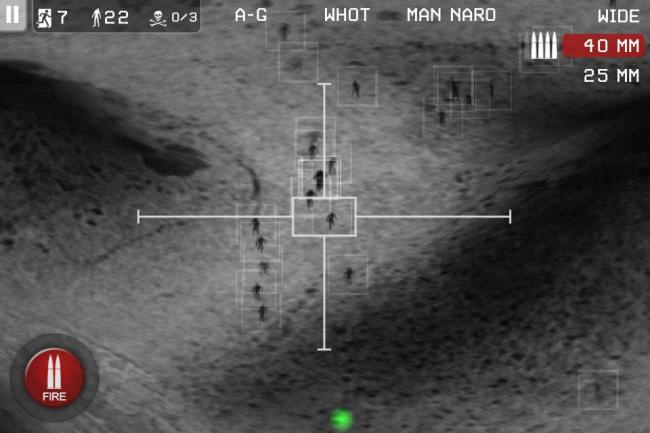 There’s only one stage to play in Zombie Gunship, killing most of the replay value and making things pretty easy at the same time. You’ll eventually learn where all the zombies tend to cluster, arm the 105mm and go to town.

Zombie Gunship is a fun game for as long as it lasts. It’s very well-made, and has a fun premise. But the lack of multiple maps, modes or any other reason to replay other than topping your score makes Zombie Gunship merely a fun diversion than a fulfillment of Zombiepocalypse Now.