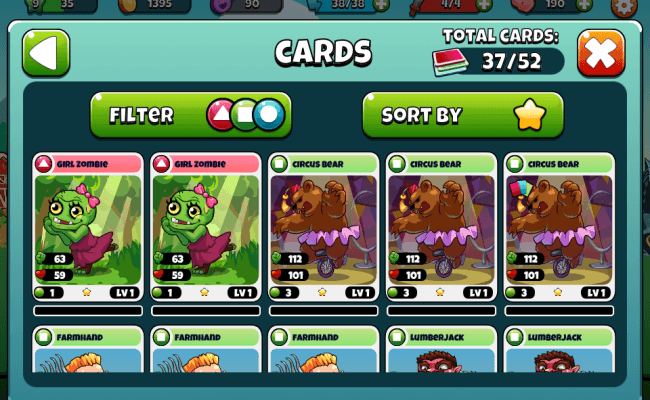 Easy-to-play, but just not fun-to-play

Zombie Farm Battles is an interesting twist on the collectible card battle game genre, not because it manages to make it interesting in some meaningful way – it doesn’t – but because of the very simplified, stripped-down approach it takes. It’s “Baby’s First Collectible Card Game,” a CCG for people who can’t be bothered to figure out CCGs.

The goal of Zombie Farm Battles is to collect virtual trading cards featuring an array of zombies and other characters, like farmers, lawyers, robots, and so forth, and use them in cards-vs-cards battles with other players. Cards are earned by “invading” levels with names like Old McDonnell’s Farm, Three-Ring Circus, Corporateville, Pirate Bay, and Ninja Castle (in spite of the title, only the first level is farm-related), each with five quests to complete, and culminating in a boss fight.  Tap the screen, advance a few steps, open a treasure chest, or fight an enemy, and repeat until done. 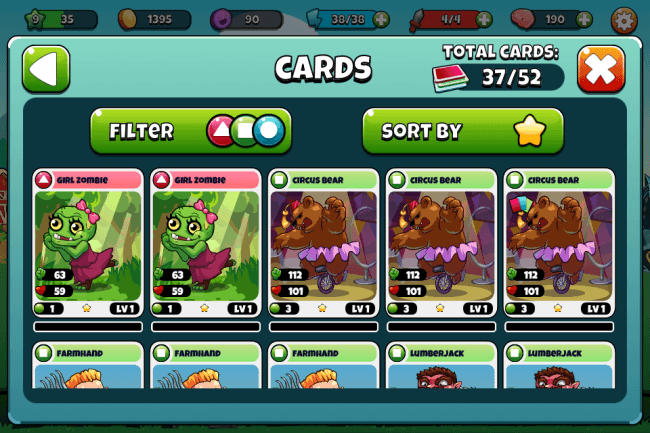 Once you’ve finished the fifth quest, you’re off to invade the next level, although each quest offers different cards and you’ll have to play through them multiple times if you want to collect them all. Your movements are limited by your energy, however, which is consumed incrementally as you go and recharges at a rate of just one point per minute. While you wait (or whenever the urge strikes) you can also go head-to-head with your fellow players via the “Battle” option, which presents you with a list of five randomly chosen players to fight. But this option is limited too, by stamina, which recharges at an even slower rate.

Refills for both are available for a price, of course, and if you don’t care for your list of opponents you can opt to have five new ones selected – also at a cost. Fortunately, even a loss earns you a small amount of Battle Points and Friend Tokens (Battle Points represent your total PvP score and thus your ranking, while Friend Tokens are one of the game’s three different currencies, used to buy certain types of cards) so there’s really no reason to duck tough fights. But energy usage increases dramatically as you progress through the game and there’s no way to manually adjust your stats as you gain levels, so you can expect to either pay to play, or play in very short bursts punctuated by relatively long stretches of waiting, in fairly short order. 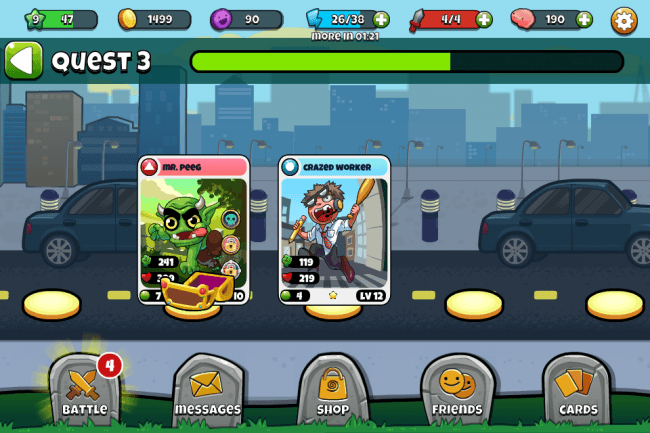 You can “enhance” your cards by combining them with lower-ranked cards to increase their experience and levels, raising their attack value and health, and certain cards may also be “mutated,” which gives them special powers like the ability to instantly kill an enemy card or leech an opponent’s health. There is no “evolution” option, although that will only mean something to people who have previous experience with the CCG genre.

And that’s really about it. Zombie Farm Battles is a very bare-bones experience, even for a CCG. It offers extremely limited variety and interactivity, yet at the same time it’s actually a rather slow-moving game, mainly because of what appears to be a need to contact the remote server with literally every step you take. It also sometimes feels a tad slow to respond to screen taps, although in all fairness that might just be my patience wearing thin. 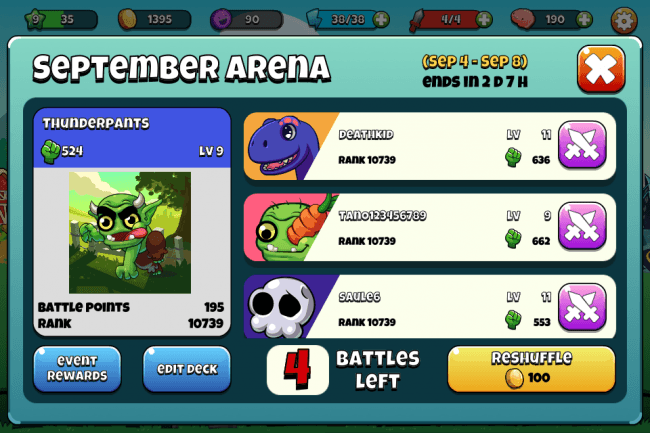 Zombie Farm Battles looks okay, with a bit of a Plants vs. Zombies vibe to it, and the music is actually quite listenable, but the real question here is, why would you bother? It has neither the crossover appeal of licensed games like Transformers Legends, Marvel: War of Heroes or Star Wars: Force Collection, nor the complexity of literally any other CCG I’ve played – and I’ve played quite a few of them. As near as I can figure, it’s aimed at children: easy to understand, easy to play, and not in the least bit punitive. Got a youngster who’s hung up on zombies and likes to collect things? Give ’em this. But most people, I suspect, will find it too insubstantial to appeal, even for a collectible card battle game.