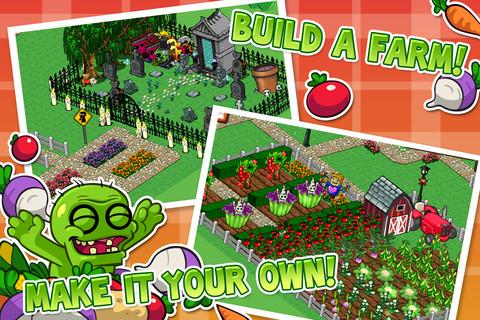 Back in 2010, there was an iOS app that challenged a Farmville-crazed nation with a bold proclamation: why just grow plants when you can grow plants and invading zombies? These worlds came from the proud mouths of Playforge, and their eventual multi-million-download app, Zombie Farm. Two years later, amidst rumors of Zynga stepping their farm up to a second version, it’s Playforge’s turn to beat them to the punch. Introducing Zombie Farm 2.

For those of you unfamiliar with the original title, here’s the gist: you still plow, grow, and dig your day to a crop-laden field like the usual farm sim. Growing plants earns you both money and experience, which can be reinvested back into your game in forms of more plants, items, and a larger farm.

The big twist is that instead of fighting everyone’s favorite antagonist, you’ll be growing them! Your farm hosts up to 16 (and later 20) undead minions suited to fight your battles for you and protect your farm. From tiny midget zombies to enormous monsters, each adorable undead creature has a charming battle cry about their thirst for brains.

In the largest change from the original, plant-infused zombies no longer require the tedious task of growing zombies next to plants and crossing your fingers. Instead, you can purchase mutations straight from the store, and combine zombies in the all-powerful zombie pot in order to get super mutations. If you thought zombies were terrifying, wait until you see one with a tomato for a head and carrots in its eyes. Now that’s terrifying.

Growing and planting new crops and creatures can last for hours and hours of fun free play, but eventually you’ll be walled off by the need to purchase items through premium currency, aka brains. Want blue zombies? You’ll need the 20 brain Blue Grave, and its red-colored counterpart is 40 brains. 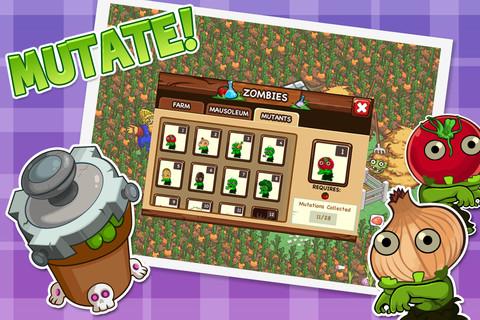 At 50 brains for $4.99, it isn’t highway robbery, but it’s still a major portion of creatures that are walled off by in-game purchases. You can occasionally earn brains occasionally playing through the game, but not enough to move forward at a reasonable pace. It also seems silly that nearly a dozen special zombies cost 50 brains apiece. Your premium zombies can still die!

Simply growing plants and zombies is as addicting as the sim genre can be by itself, but what’s the point of growing zombies unless you can use them in battle?

Lucky for you, it seems that dumb humans are basically begging you to take their brains. Unlucky for you, these battles are as boring and unintuitive as the original. When you decide upon an opponent (such as evil farmers, pirates, ninjas, and robots), your 16 zombies will line up and attack your opponent one at a time.

It seems that despite their frequent thirst for brains, the zombies need direction to remind them. After waiting for a meter to fill, tapping a prepared zombie will send them into battle. Occasionally you’ll have to tap on a zombie that’s distracted (it seems brains aren’t the only things on a zombie’s mind, after all) in order to keep them focused. A few taps here and there will either spell out victory or doom for your team, earning your rewards and utilities in exchange for a pretty boring minigame. 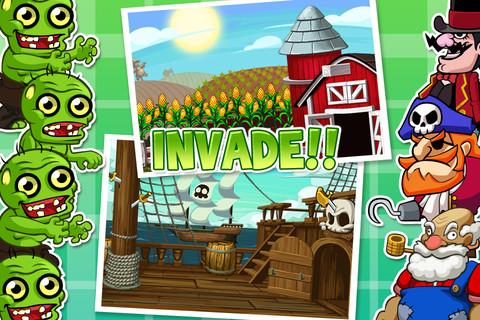 The only real problem aside from combat in Zombie Farm 2 is, well, that it doesn’t really feel like it deserves to have a “2” in its name. It carries the same character models, the same items available in the store, the same music, and almost all of the battles are exactly the same as the original Zombie Farm.

It doesn’t make the game itself any worse, but it’s bound to end up disappointing some classic Zombie Farm fans who were expecting something along the lines of a total reboot. To put it bluntly, everything in Zombie Farm 2 very likely could have been implemented in an upgrade to the original. If you keep your playforge name and password from your original Zombie Farm device, you can even transfer the original farm over.

Upgrade or not, the few small things Zombie Farm 2 does to improve it over the original will at least keep it as quirky and addicting as usual. It’s just a shame to see some of the biggest pitfalls of the original, like combat, end up as a simple cut-and-paste job.

If you played the first farm adamantly, you won’t feel much change, but gamers who still haven’t had a chance to tackle this iOS classic, it’s a no-brainer to give it a shot.