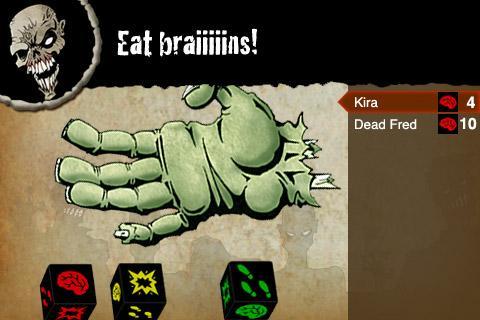 I’ve always had a soft spot for press your luck style games. There’s such a fine line between maximizing your points and losing it all that the temptation usually takes us just a bit too far and we stick around ever so longer than we should. Zombie Dicecombines this basic mechanic with the simple pleasures of brain eating (what, with you being a Zombie and all).

Zombie Dicewas recently released in the real world as a cup and 13 dice with brains, shotgun blasts and feet on them instead of the typical numbers. They represent the people that you’re stumbling after to quench that uncontrollable appetite for tasty brain. The brains will score you 1 point, the feet will need to be re-rolled, and the shotgun blasts are bad news.

The dice come in 3 colors and represent how difficult that person will be to kill. The green ones are easy so they have 3 brains on different sides and only 1 shotgun blast. The red ones are the opposite and have only 1 brain emblem and 3 blasts. Yellow are somewhere in the middle.

Zombie Dice, as I alluded to in the intro, is a press your luck dice rolling game. You play as a zombie and try to collect as many brains as possible while avoiding getting shotgunned down. You’ll need to stop and end your turn to collect your points, and make sure you do it before rolling 3 shotgun blasts because then you lose everything and your turn ends.

So your turn plays out like this. Your onscreen zombie hand rolls 3 random dice. Brains are put to one side, blasts to the other and feet in the middle of the screen. Then you decide if you want to keep going to stop and collect your score. If you decide to keep going, feet dice are re-rolled with a few new dice added in to make sure you always have 3. After the roll, dice are sorted and again you decide whether to stop or keep going. 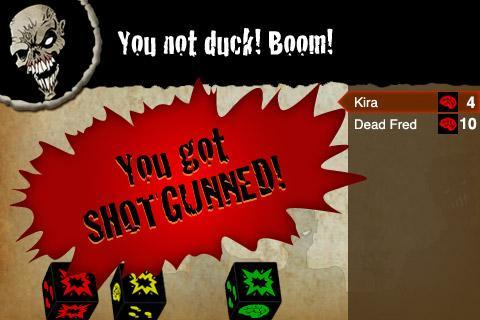 The game is incredibly simple, so the fun is more in pressing your luck and watching friends push it just a little too far. Luckily the game can handle up to 8 people with a pass and play feature, so it’s perfect for when you can get a bunch of people together. The simplicity of it makes it well suited to midnight movie line waiting or convention floor sitting with friends. Waiting in line at Comic-Con with buddies and it’s going to be awhile? Boom, break out Zombie Dice.

There’s not much graphically since the game revolves entirely around dice rolling, however the onscreen zombie mumbles and yells out at times, like some sort of undead play by play announcer. It works with the light nature of the game, never letting you forget that the experience revolves around acting like a zombie.

There’s an AI opponent you can play against, but I’d really only recommend it if for learning how to play. It’s totally functional, but pressing your luck against the computer just doesn’t provide the same tense thrill as playing against real life people. It’s a simple and quick game, so if you’re looking for something that’s even a little deep you’ll want to go elsewhere. Having played the real world version quite a bit, I can say this is a perfect recreation. And since it’s much easier to carry around, I’ll always be ready to entertain friends with a quick round of Zombie Dice.