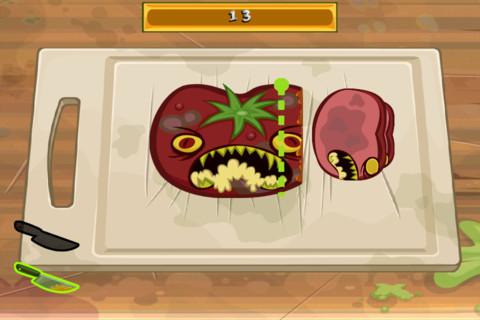 Without its bloodthirsty patrons, Zombie Cookin’ probably wouldn’t be anything special.

At its gameplay core, Zombie Cookin’ has you preparing dishes by removing brains from your victims’ heads and then slicing them and then placing them in some sort of grotesque stew to serve to your undead clientele. Prepping is only half the battle though, as you’ll also have to place the meal on the stove to allow it time to cook.

After finishing a dish, you’ll receive a rating based on how well you cooked it; or rather, how fast you cooked it. The judging doesn’t seem to reward quality; just how fast you cooked the dish in question. Sounds like a classy place to eat, doesn’t it? I guess if the dish being served is scrambled spider legs, it couldn’t be too appetizing in the first place, so what’s the problem?

Once in a while you’ll come across an ingredient that requires you to shake your iPad or iPhone around like a crazy person. The on-screen directions say to move your device in a diagonal direction back-and-forth, yet it appears to do a whole lot of nothing. Even shaking it around in an erratic pattern does absolutely nil, so dishes that require these actions be performed may as well not exist because obtaining anything but a bronze medal is likely impossible.

So, is Zombie Cookin’ nothing more than a clone of Cooking Mama with a zombie theme? Yes. But if you’re going to make a clone of a game, it may as well be one of the most successful titles out there. Cooking games are also a dime a dozen these days, so having a well established theme does help things a bit, even if it means that the developers clearly played it safe.

Besides cooking various dishes in your unsanitary kitchen, you can also customize your looks from head to toe, allowing you to change your eyes, hair, head shape, gender, as well as whether or not you’d rather wear a clean apron or a stained t-shirt. Customization is a nice touch to these types of games but you rarely see your chef in Zombie Cookin’ so it’s a useless feature most of the time. 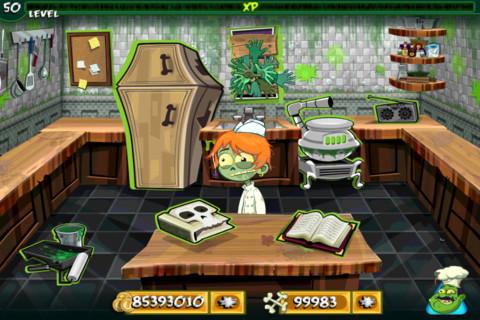 The most annoying element in Zombie Cookin’ is the ingredient collection process, which requires you to send off your zombie horde to accumulate them. Many dishes require that you have specific ingredients in order to cook them, and you just can’t cook them until you have all of the required materials. What this means is that you have to wait until the horde comes back to even start cooking these dishes. Well, that is unless you want to spend real money to speed things up, but where is the fun in that?

Zombie Cookin’ had a lot of promise, it’s just unfortunate that it fell into the same old traps and mistakes a lot of games like it make. If you want to make dishes on your iPhone or iPad, may I suggest Cooking Mama instead?