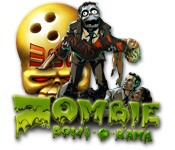 Grabbing a heavy ball and sending it thundering down the lane towards ten unsuspecting white pins can be a great way to unwind, and the resounding victorious crack of the ball against its target is simply cathartic. But those who feel they need a little something extra to sweeten the experience, Zombie Bowl-O-Rama offers even more excitement by replacing the customary pins with flesh-eating undead monsters. Instead of just bowling, you get to be a zombie hunter…armed with a bowling ball.

It’s hard to say exactly what kind of force would actually be powerful enough to make the dead rise from their grave and seek to snack on human brains. In this case, the culprit is a rogue meteor that falls from the sky and crash-lands in the local graveyard – how unlucky. The glowing green radiation it gives off seeps into the earth and wakes the rotting fellows lying beneath the soil. Whether it’s from a hunger for sweet, delicious brains or a desire to get reacquainted with their old favorite recreational pastimes, these zombies head straight for the local bowling alley where you’re hanging out. Even though the living dead rudely interrupt your match, it’s not enough to stop you from having a good time.

In Zombie Bowl-O-Rama you can compete against human or computer-controlled opponents in bowling match battles that also serve as an effective means of zombie crowd control. Instead of resetting with a shiny new set of white pins at the far end, a small horde of zombies will crawl out of the back hole. Both you and your opponent will take turns attempting to obliterate each wave of zombies with your bowling balls for a high score while also using trickery to thwart one another.

A simple and effective control scheme makes the bowling gameplay easy to pick up. During each turn you’ll decide what horizontal spot on the lane you want to throw the ball from, select a power level for your throw, aim your shot, and then let it fly. Once you’ve thrown the ball, you can also use the mouse pointer to make it steer around obstacles and adjust its trajectory as it rolls down the lane. A stead aim and a little luck will send the zombies flying in all directions.

Zombie bowling is inherently fun on its own, but it’s the tricks and treats that make this Halloween-themed bowling experience so entertaining. Random power-ups will appear inside gravestones that pop-up along the lane during each turn, giving you something else to aim at besides the undead shambling towards you. Collecting these helpful goodies adds them to your inventory for later use, and you can hold up to five at a time.

Red gravestones hold tricks you can use during your opponent’s turn to try to make it more difficult for them to score. Among many other silly and creative tricks, you can summon a werewolf who’ll blow an opponent’s ball into the gutter, place a buzzsaw on the lane to slice it in two, drop sticky honey everywhere to slow their ball down, and even make the zombies line up and dance so they’re tougher to hit.

Green gravestones hold treats that can enhance your own ball and help you rack up big points in other ways. You can turn your ball into an explosive round of meat, place pits that give you a fiery turbo boost, launch rockets full of acidic goo, and roll a swarm of bees. Since both you and your opponent has access to these arsenals, an element of strategy comes into play.

Zombie Bowl-O-Rama features a nicely designed spooky-themed presentation that flows evenly through all the menus and gameplay. The 3D graphics are good looking, and the different kinds of zombies that appear are very animated and amusing. You’ll encounter zombie construction workers, businessmen, and other occupational themed ghouls, although they’re not as varied as the initially appear, since you basically see the same few zombies repeated throughout the entire game. The start-to-finish playtime is unfortunately on the short end, and there’s also not enough visual variations found between the six bowling alleys you’ll play in.

On the positive side, the gameplay itself is so entertaining that you’ll want to go back and play a few rounds here and there even after you’ve finished the main game. Unlockable trophies earned for completing certain goals give you extra goals to achieve, and sitting down to competitively bowl over zombies with a friend is a must. Fans of zombies, bowling, or both with get a few kicks from this off-the-wall title.