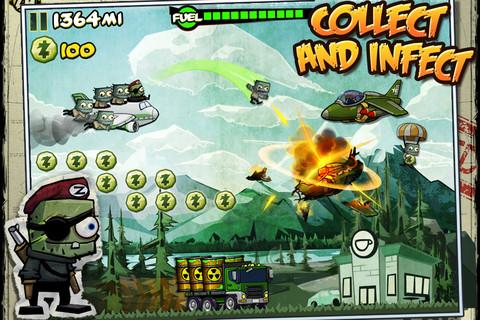 This plane is hungry for brains

I’m comfortable saying that “endless runner” is a bonafide genre now. Canabalt was really the first one to break out; it hit the ground running (terrible pun review quota filled) and never looked back. While the setup is different from title to title, the point is always the same: travel as far as possible. There’s no beating the game per se, just go as far as you can without failing. Zombie Ace has the same great trappings, but adds some much-needed complexity to the proceedings.

As in other endless running games, Zombie Ace is all about travelling as far as you can. Here, you’re an undead pilot flying a plane full of your brain-addicted zombie friends, travelling from city to city in an effort to infect us all. You tap the screen to fly up, and let go to descend back to earth, all the while avoiding obstacles and trying to stretch out the fuel. When your fuel runs out, you’re dead (well, even MORE dead). Really pretty standard stuff for this type of game.

But standard is a tough sell for me at this point. As someone that’s spent close to 20 hours playing Jetpack Joyride (I know, I’m insane), just another runner really isn’t going to get it’s icon onto my home screen. You’ve got to be bold, try something new. Zombie Ace seemed to know that, and added in a few different elements that really help the game stand out as something unique to move the genre forward.

While tapping to fly and avoid obstacles like buildings and clouds, you’ll sometimes encounter military jets that fly in and try to shoot you down. Tapping the planes causes one of your zombies to jump from your plane to theirs, gnawing the plane until it explodes. At which time the zombie (or zombies if it’s a large plane) will to the ground in a parachute. Grabbing them out of the air serves not only to score you more points, but also as ammunition you can launch at more planes later. They also help you infect cities. Let me explain.

The game starts with you taking off in Seattle. As you fly and attack enemies, you’ll occasionally pass over other cities as you travel through the US. If you choose you can land your plane in these cities, ending the game early and scoring for how well you did, how far you travelled and how many zombies you have with you. If you bring enough zombies to a city, you can infect it!

Infected cities confer other bonuses and an occasional later starting city, enabling you to fly further. To maximize your damage and points and earnings, you really need to set the plane down in a city before you crash.

Zombie Ace is free-to-play, and incudes all of the microtransactions that you’d expect these days. By playing well you earn bucks, which can be used to buy power ups and upgrades to your plane. There’s also second type of currency that’s much harder to earn, but is happily sold to you for real money… in this case it’s brains. You need money for some things, brains for others. You’re pushed towards dropping real world money early, but I never felt like the game was broken because of it.

You can earn those brains by completing missions and going up in rank (like Jetpack Joyride) or earning scratch-off tickets while you play. It’s of course easier and faster to just buy brains or money, but that’s not the only choice you have. These types of models always make me leery but Zombie Ace seems to have found a good line. 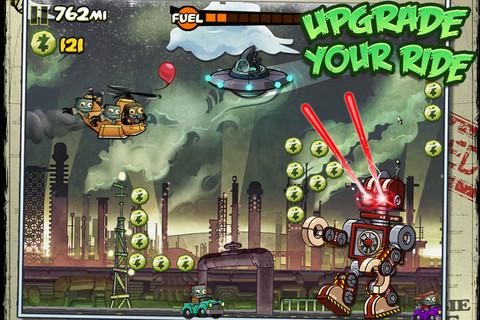 My reaction to a free-to-play game is always the same: I just wish I could pay for it and get rid of all the extraneous factors designed to get me to buy in a bit at a time. I give Zombie Ace some credit in that I can earn those brains by taking other actions, such as liking them on Facebook, watching an advertisement, or even sending them a feedback email.

My only real complaint about the gameplay side of things is that I feel like there’s no much warning as to when a city is coming up, and it’s way too small a target to hit. There’s a sign that goes by quickly to give you a heads up, but if you’re not oriented right when the city flies by you’ll miss it. It’s a very small target, and I found myself more than once avoiding some obstacles that caused me to fly right by it.

I played Zombie Ace for about an hour and decided it was home screen worthy. While I wish I could get rid of the various ways the game wants to sell me the brains, it’s cooked into the game pretty well and could be much worse. The complexity added to the gameplay is a much-needed change for the genre as well; it feels fresh and unique in a crowded space on iOS. I think anyone would be well rewarded for checking it out.