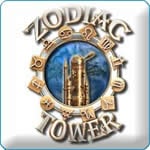 Even on the cloudiest of days, it’s now possible to look up in wonder towards the heavens thanks to Zodiac Tower.

Blending medieval imagery with Jules Verne-style “steampunk” science fiction and a healthy dose of ancient mysticism, the outing sees you playing a character who has dreamed all their life of becoming an astrologer. Journeying to the edge of the world, you finally reach the fabled Zodiac Tower, a structure which stretches 107 individual levels into the sky.

Assuming you select Quest mode (Arcade options are also available, wherein you attempt to play one stage as long as possible to earn bonus items) your goal involves climbing every one. Do so, and you won’t just gain knowledge and wisdom, not to mention the satisfaction of enjoying a branching mission structure wherein you select the next stage to attempt after completing each previous challenge. You’ll also collect ancient Leonardo DaVinci-esque mechanisms that, when assembled, let you build the legendary Zodiac ship and soar off into outer space.

Happily, the action, not to mention the range of level backgrounds (e.g. libraries overflowing with books and globes, rooms filled with miniature blimps and sailing vessels) is just as loving flushed out as the plot.

All scenarios consist of differently-shaped grids of tiles which occupy the center of the screen. Tiles on the board may be empty or contain strange symbols such as cursive M’s, bizarre squiggles or white pyramids. To the left-hand side of the playing field rests a holding pen, where Tetris-type shapes – Ls, four-block squares, Z-like pieces – stack up over time. (You can always ask for more if they’re not coming fast enough, though any pieces at the bottom that go unused for a few seconds disintegrate.)

The trick is finding similarly-shaped combinations of symbols on the board you can match each piece to. Stage goals, naturally, include eliminating all symbols from the board, or removing the highlighting behind certain squares by making matches atop them. Be forewarned, though: Wood or metal squares may require multiple matches to remove, and stone blocks adorned with sunbursts, shields and faces periodically appear, demanding you match shapes next to them before they crumble.

Power-ups (compatible with all like-sized shapes) and bonus items such as shapes that can be paired with any combination of symbols keep things interesting. You can collect coins, used to purchase items between levels at the in-game store; bombs and dynamite that explode, destroying multiple squares in a single shot; rockets, which shoot out horizontally, nuking everything in their path; even random chain lightning attacks or magnets that suck all nearby symbols of the same type into a swirling vortex. Be sure you collect keys that unlock additional game options too.

Frankly, it’s rather bizarre how well the overall combination works, with later levels naturally proving most challenging due to hard-to-reach squares or the greater frequency with which larger, more difficult to use shapes appear. Granted, we didn’t feel especially challenged until well into the adventure. But it was just long enough to get a handle on the basics, and a sense of what strategies are best wielded in the face of increasingly overwhelming odds. The pacing and level design work employed here is skillful enough that you won’t ever feel bored or exasperated though, rendering the title suitable for consumption in short spurts or longer stretches alike.

This being the case, despite some lengthy initial load times and fairly basic object designs, the game’s presentation and play will delight nonetheless. As such, we wholeheartedly recommend it, even if you’re not the sort who regularly consults with psychics or, for that matter, can actually tell a hamster from a horoscope.