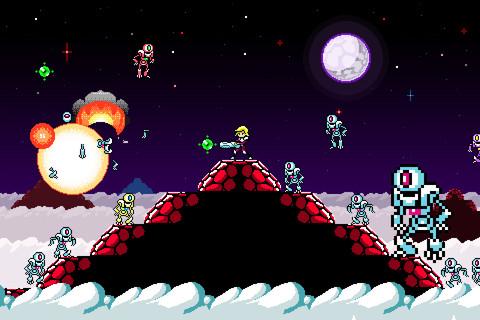 ZiGGURAT is a simple endless shooter that adds up to big iOS fun.

As mobile gaming has evolved it’s shifted to a market dominated by free-to-play titles stuffed to the gills with microtransactions. It seems like every single game on the market wants you to heavily invest hours, money or both to unlock every little bit of content available, no matter how insignificant. With that in mind, ZiGGURAT is a refreshing blast from the past, an endless shooter that gives you a gun and a simple task, survive as long as you can. No frills, no tricks, and pure fun.

ZiGGURAT‘s tale is a hopeless one; you are the last human alive perched atop the game’s titular ziggurat, trying to hold back an alien army for as long as possible. The sun sets, you fight. The moon rises, you fight. The universe ends, and still you fight. There is no silver lining, no glimmer of salvation on the horizon, you’re going to die, it’s just a question of how many of the alien bastards you’re going to take with you. Like the rest of the game the plot is very minimalist, and also extremely effective.

Gameplay is also simple, yet at the same time immensely satisfying. While your goal may simply be to blast baddies, after just a couple runs through the game you’ll find yourself strategizing and planning your attacks. That’s because the various enemy types present different threat levels, and your skills at prioritizing which dangers are imminent and reacting in a flash will be what determines how long you survive. Making things even more interesting is the fact that your gun can be charged, but only to a point. Juice it up to full power and pull of a headshot and you’ll create a cascade of explosions that can all but clear the screen, overcharge it and you’ll be left with a weak blast that barely pushes the enemies back a few steps. As the game progresses the screen quickly turns to chaos, but those who can keep a cool head in the midst of insanity will find that when the going gets tough that’s when things become the most fun.

Accompanying the crazed onscreen action is an awesome chiptune soundtrack that really gets the heart pumping. While the game’s retro visuals are nothing special, the music does a great job of capturing the adrenaline and fear that comes with being the last person standing while facing literally impossible odds. Everything is better with an awesome soundtrack, even your own demise. 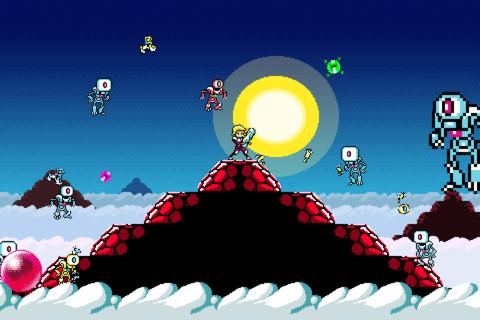 Also worthy of mention is ZiGGURAT‘s unique control scheme, as it tries to do something different and mostly succeeds. The default controls have you angling your character’s gun by swiping along the bottom of the screen, and thus you don’t clutter up the screen with fingers during the height of the action. It takes a bit of getting used to, but once you’ve got it down pat the controls feel very natural and intuitive. Those who just can’t get the hang of it can switch to the Angry Birds style slingshot controls, but I really don’t recommend it, as it gets very hard to keep track of what’s going on onscreen.

ZiGGURAT is a refreshingly straightforward experience that also benefits from the fact that it’s a ton of fun to play. Personally, I’m not great at the game, only breaking 150 kills one time, but I keep finding myself going back to it when I’ve got a bit of free time or just want to play a quick game. If you’re also tired of the endless parade of games that make you tap and wait or prove to be nearly impossible without spending actual money on new weapons or upgrades then ZiGGURAT is the cure for what ails you.

Kingdoms of Camelot: Battle for the North Review