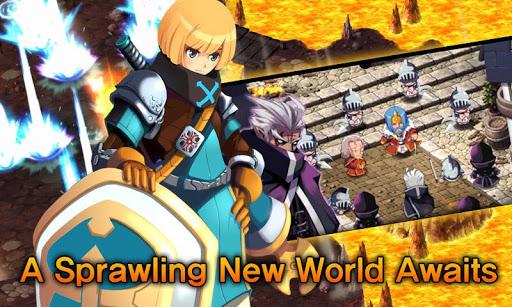 Zen and the Art of Awesome.

I’m the type of guy that brings a gun to a knife fight, so when I first switched on Gamevil’s new action/RPG Zenonia 5, I was instantly drawn to the character of Evan – the game’s steam-punk gunslinger. I envisioned myself a pistol-packing Indiana Jones in a world of scimitar-swinging swordsmen, blasting baddies back to the Stone Age with a single shot. Instead I was quickly mauled to death by a gang of fuzzy little critters.

Our story begins as so many other epic journeys do – during a time of discord and corruption. The peace that once blessed the realm was broken when the hearts of good men failed. The rich and powerful lord over the suffering masses and from out of the wild-lands a devil tribe has risen to terrorize the populous. But a hero has come to restore order to the world – a hero with a mysterious past and a head full of visions that answer a sacred prophecy. That hero is your player character, and he comes in four distinct flavors: Abel the Berserker is your blade-wielding brute, Evan the Mechanic is your rifleman, Ryan is the Paladin equipped with sword and shield, and Neil is the Wizard of the group. After selecting your character/class you can add a bit of a personal touch by changing their hair type and skin tone.

The controls are good. On the left of the screen you have a virtual joypad. You move your thumb along its edges, and your character follows. To sprint, simply double tap and you’re off. On the left is one giant button surrounded by eight smaller ones. The big one is your context-sensitive button. You press this to attack, talk, pick up items, etc. The smaller buttons surrounding it can be filled with skills or items you come across for quick access. Also on the left center of the screen are your pause button (which also brings up your menu screen) and your quick save button. Finally, a map is located in the upper right corner that expands when touched.

Another neat little touch is the Fairy you run into early in the game. She follows you around, buffing you with spells she gains when you extract the essence of special stones, and you can level her as well. As a welcome bonus, there’s not a “Hey, listen!” to be heard.

From the main menu you’re able to manage your equipment, gold, experience points, and skill tree, as well as check on your current quests and jump into the game’s fantastic bonus modes. I found myself dedicating quite a few sessions to PvP, and The Abyss allows you to obtain legendary items that can be carried over into the main game.

Zenonia 5 looks outstanding. It’s like The Secret of Mana and Final Fantasy VI had a baby. The terrain is varied (you’ll see shanty towns, cruel deserts lined with abandoned tracks, harsh mountain passages, stagnant swamps and more as you push forward) and every environment is a sight to behold. The character design is aces as well. Everything screams with personality, from the lowliest minion to the most menacing boss.

There are a few downsides though. For one, the game is freemium, and therefore carries the baggage of that monetization model. An in-game currency (called Zen) can be used to buy higher level weapons and equipment such as Origins of Life – a Phoenix Down-like item that brings your character back to life without penalty. This is important, as you revive back at your last save point when you die, with a loss of 10% experience, 5% gold, and 10% equipment durability (yes, your equipment and weapons can be damaged over time and eventually destroyed altogether – but they can be repaired). To be fair, you can use gold collected throughout the game to purchase most of what you need, but that turns the game into a bit of a grind. But then again that’s par for the course of most RPGs.

The second shortcoming is the fact that you can only play the game if you’re using a wireless connection. Some kind of funky DRM, I suppose. That said, it’s only a problem if you’re still wired to your wall.

I highly recommend Zenonia 5. The main quest is meaty enough to keep you engaged for many hours (especially if you’re not purchasing Zen equipment off the bat) and even more if you jump into the other modes of play. This is one of the best RPGs I’ve played on a mobile (read iOS/Android) platform to this date.