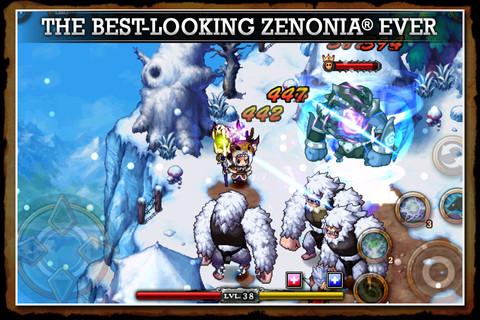 The Zenonia games remind me a bit of the Resident Evil films: The newer titles seem to be working really hard to make up for the problems of their predecessors. In the case of Zenonia, each release has done a lot to correct the shortcomings of the previous game. With Zenonia 4, the overall quality has been refined into something that’s pretty solid, though it’s still not quite perfect.

This is how the story starts out: You control a spikey haired androgynous hero (groan) named Regret (GROAN). Regret lives in a small idyllic village in the middle of nowhere, until one day when a mysterious stranger shows up. It turns out that the mysterious stranger is actually Regret from the future who has come back in time to tell his younger self about how he’s actually dead and living in a fantasy world that he needs to wake up/resurrect from (GROOOOOAN). Oh, and there’s some dark lord or something that he needs to defeat in order to save the world (sorry, I can’t groan anymore, I ran out of breath). Honestly, once you get past the absurd details, the story is pretty generic fantasy RPG stuff. Oh, also: the dialogue is beyond terrible, but this isn’t the type of game that you really play for its narrative.

Now, this is a very good looking game. In fact, even though it’s not a universal app, it arguably looks better on the iPad than it does on the iPhone. The 2D top-down graphics feel like they’re straight out of an anime, and the cutscene portraits that showcase dialogue are equally high-quality. However, the localization to English seems like it could have used some more time with the editors, since it occasionally features grammar and/or spelling errors, not to mention that the on-screen text wrapping is regularly wonky.

The strongest part of Zenonia 4, thankfully, is its gameplay. The game will likely play a bit differently for everyone, thanks to the substantial customization that’s available. Aside from the various character classes that you can choose to play as (warrior, assassin, ranger, or druid), how you level up and upgrade Regret changes how he performs. The different classes offer a number of different play styles, all of which feel substantially different from one another.

The bread and butter of the game is its action-oriented gameplay, which is both well-made and fast-paced. The D-pad, action button, and quick-item slots that were present in Zenonia 3 are still here and don’t seem to have been messed with, following the wise philosophy of “if it ain’t broke, don’t fix it.”

Because this is a freemium game, there are some microtransaction elements present, not to mention a lot of advertisements, both demanding you give Zenonia 4 a high rating and check out other games. The microtransactions are actually a bit surprising because they seem to only be limited to the in-game currency of Zen. As a result, you can play through the entire game and never have to spend a literal penny on acquiring virtual items or skill points. That said, if you do shell out some cash, you can make things a lot easier for Regret during his battles. 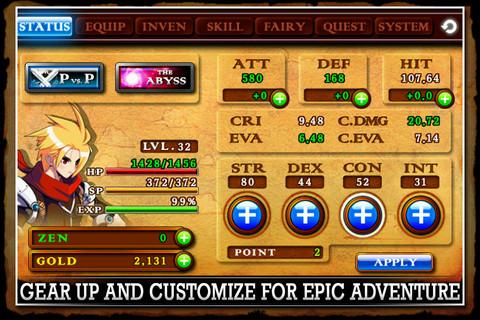 There is one major irritation in the game, though, since you’ll constantly be pressured to provide it with a five-star rating. Until you’re willing to rate the title, a reminder message will constantly pop up on your screen (provided that you haven’t already clicked on the “No, Thanks” option). Also, as opposed to other games — which usually offer an in-game reward for high ratings — the message basically states (I’m paraphrasing here) “if you want to see any expansions or updates, you need to give Zenonia 4 a good review.” It’s obnoxious, to say the least.

Zenonia 4 is a lot of fun (despite its horrible storyline and dialogue) thanks in large part to the solid mechanics, great graphics and fast-paced combat. It doesn’t exactly break the mold, and it’s still got some issues, but it manages to provide an entertaining action RPG experience that is both epic and enjoyable.