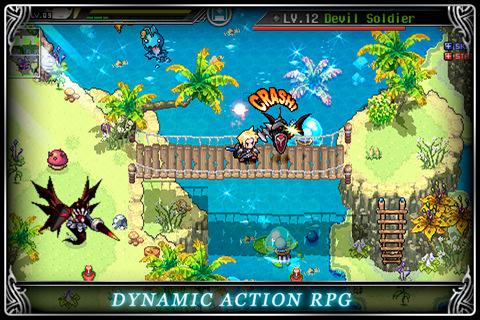 The Zenonia series is still fast-paced and fun, but it’s starting to feel a little old

Being an orphan is tough: you just can’t catch a break. When you’re growing up, you have to put up with endless abuse from the local bullies. Then, it always turns out that you’re destined to save the world. It’s just work, work, work. Chael, the star of Zenonia 3, has to deal with all of this, but it also turns out that he’s the heir to a heroic dynasty. Like its predecessors, the game is a lot of fun, but the series is starting to reach the point where it feels a little redundant.

The story, after a long-winded intro scene, tells the tale of Chael. Chael is actually the son of the main character in the first Zenonia, and he’s clearly following in his father’s footsteps. He and his friend wind up traveling through a portal that lands them in the middle of a war between the Devil and Divine Tribes (read: Heaven and Hell). As a result it’s up to Chael to save the world.

Anyone who’s played the previous Zenonia games will feel right at home with Zenonia 3. Players move Chael with a D-pad, while the action is handled via the solitary attack button on the screen. While it’s simple, it doesn’t mean that it’s slow-paced or without depth, either. Combat is filled with button mashing, there are a number of slots to fill with items for quick access, and there’s several dozens of hours of gameplay to experience.

It should be noted, though, that the button mashing sometimes gets a little dull, especially when grinding through an area to gain experience in order to level up. On top of that, combat can sometimes feel really frustrating, since enemies re-spawn really quickly; occasionally, there isn’t enough time to completely clear an area of enemies before they start reappearing.

Also worth mentioning are the graphics. Things look they’re pulled straight from the Super Nintendo era of the Final Fantasy games. Things look bright and crisp, and the top-down animation is decidedly old school. Needless to say, it’s still a thrill for anyone who grew up playing RPGs on 8-and-16-Bit systems.

Now, the obligatory exposition gets old pretty quick, but mainly because there’s just so much of it. The characters’ dialogue is over-dramatic and a little hammy; this would be fine to read through in short bursts, but there are times where players will spend over five minutes reading about what’s going on (unless they decide to skip the cut scenes and be left utterly confused about the story). Also, these moments serve as a rather stunning interruption to what’s normally frantic gameplay; not to mention that things are all the more jarring thanks to the spotty translation and somewhat dull story.

Compared to its prequels, Zenonia 3 doesn’t exactly feel like a step forward. Instead, it feels like the same gameplay dressed in a new story. That’s not a bad thing, but it means that things don’t feel nearly as innovative and fun as they once did. Still, this is an immensely fun action-RPG, and fans of the genre won’t really have much to complain about if they add this to their iPhone’s game library.