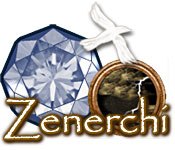 There’s something about Zenerchi‘s unique circular presentation and rotating wheels of color that make it mesmerising to interact with as well as graphically spectacular. But underneath all of the game’s talk about finding inner piece is a fiendishly challenging take on match-three.

Typical match-three games like Bejeweled and Big Kahuna Reef involve rotating or swapping rows of symbols to create matches of three or more and clear them from the game board. In Zenerchi, the traditional square playing surface has been replaced by a circle made up of rings divided into colored blocks.

Matches are made by rotating the rings of the circle to create a column of three, four or five blocks of the same color. When a match is made, the blocks are funnelled down into the center of the circle, called the Zenerchi, where they fill up part of it.

The Zenerchi consists of pie wedges of different colors, and the catch is that these Zenerchi pieces only fill up if the blocks that are funnelled into it are of the same color – so it’s important to rotate the rows carefully. Also, matches made with the larger blocks on the outer rows of the circle fill the Zenerchi faster than the smaller inner blocks.

When you clear a column of blocks, new blocks fill in from either the top or bottom of the screen, depending on the particular puzzle. The puzzle is completed if you manage to fill in the entire Zenerchi before time runs out. Filling up an individual color container of the Zenerchi adds a bit of time back onto the clock.

As you complete each level you’ll earn "inspirational quotes" in keeping with Zenerchi‘s holistic theme, such as "When the winds of change blow, some people build walls and others build windmills." (Chinese proverb.)

There are 50 levels and 10 worlds to explore in the game’s main Journey mode – and believe me, 50 is plenty. By about the halfway mark, the more or less relaxing romp turns into a brain buster of the highest calibre thanks to a variety of special blocks that are deployed in increasingly taxing combinations.

Binders and Enigmas are two types of special blocks that can show up on the grid randomly. Binders hold two rings together so that they rotate at the same time, while Enigmas cause whatever rings they’re touching to rotate in opposite directions from each other.

A blocker is basically a block encased in stone that prevents you from rotating whatever ring it’s a part of. Not only that, but any matches you make above the blocker will be blocked from reaching the Zenerchi until the blocker is cleared.

You can get rid of binders, enigmas and color blockers either by using them to create a match, or by destroying them with bursts, which are special blocks that are created when you make a match of five. Clicking on a burst destroys the squares around it in several patterns depending on what type of burst it is (cross-shape, entire column, or entire ring.) Another kind of burst changes the color of adjacent squares without destroying them. Grey blockers can only be destroyed with bursts. Unfortunately, you have to first run your mouse over a burst in order to see what kind of damage it’ll do, which eats up valuable time.

If the timed gameplay of Journey mode is stressing you out too much, you can give the equally interesting Zen mode a try. There’s no time limit, but instead certain random blocks have counters on them that count backwards towards zero with each move you make. When the counter reaches zero, that block turns into a color blocker. The goal of filling up the Zenerchi is the same, but Game Over occurs when the circle has become so choked with blockers that there are no more possible moves. (Ok, so Zen mode isn’t exactly relaxing either, but it’s a nice change of pace.)

While Zenerchi bills itself as a game about relaxation, it’s actually a pretty sophisticated concept that requires a lot of strategy and concentration to master. Not that this is a bad thing, but just don’t get sucked in by the notion that playing the game will somehow lead to inner tranquility – it won’t. What it will do is provide a healthy challenge wrapped in a visually intriguing package.