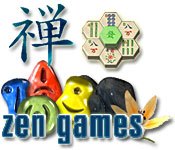 Ever heard of Hexajong or Ishidoku? We didn’t think so. They happen to be German developer Like Dynamite’s own unique spins on mah jong and Sudoku, respectively. Both games appear together in the package known collectively as Zen Games.

True to the "zen" theme of its name, Zen Games is presented like a tranquil spa outing, with graphics that are easy on the eye, and a sparse, non-intrusive soundtrack. From the main menu, you can choose to start a new game of either Hexajong or Ishidoku, or continue from a previous game in progress.

Hexajong follows the rules of the Chinese tile-matching game mah jong closely, even down to the traditional symbols painted on the tiles. The goal is still to clear the board of all tiles by matching them off two at a time. The main twist in Hexajong, however, is that instead of the traditional rectangular tiles, the game pieces are hexagonal (six-sided) in shape.

One feature that’s both a blessing and a curse with Hexajong is that the boards are truly randomly generated (unlike other mah jong casual game variations where the tiles are strategically placed to let you win more often than not). On one hand, it’s a more authentic and random experience, but on the other hand, be prepared to lose – a lot.

Replace the numbers in Sudoku with different colored stones and you have Ishidoku. In other words, instead of filling in a grid with numbers so that no completed row or column has the same number in it twice, you’re now placing colored stones into a grid so that no row or column has the same color. (For example, instead of 1 2 3 4 5, you might have red blue yellow green purple.)

Gameplay is exactly the same as Sudoku, but using colors and shapes instead of a raw black and white grid of numbers certainly makes Ishidoku a more visually appealing alternative. There’s also something therapeutic about the look of the polished, rounded stones and hearing the sound as they click into place.

Both Hexajong and Ishidoku allow you to purchase a limited number of hints using coins collected randomly throughout the game. These hints reveal the next move. Ishidoku also has a feature that tells you how many stones have been placed incorrectly to give you an idea of how off base you are. The one thing I missed, however, was a function to remove all stones from the board and start over instead of having to pick them off one at a time. (This shouldn’t be confused with the existing New Game command, which literally starts you back at Level 1 and erases all progress and cleared boards.)

The gamer in me might have hoped for some sort of story mode or chart that tracked my progression through the levels. Each time I passed a board I was apparently moving to the next level, but it was never clear what ultimate goal I was trying to achieve.

Minor complaints aside, however, Zen Games is a solid puzzle experience wrapped in an attractive package.