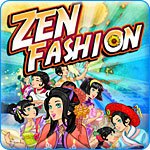 On paper, Zen Fashion works marvels, combining two favorite passions – inner peace and haute couture – into an intriguing match-three puzzler that sends you trotting about China, Japan, Korea and the bulk of the Asian continent. Unfortunately, a snappy Far Eastern aesthetic and soothing soundtrack, not to mention somewhat novel play conceit (donning new duds to mix and match powers), can’t save the title from an inconvenient truth. Specifically, that the melding of these twin concepts suffers due to inconsistent level design, too-leisurely pacing and a handful of issues that’ll have even the most patient player ready to kick the creators right in their dharma.

Starting out, you’ll take on the role of a young woman hoping to follow in the footsteps of her grandmother, a famed fashion designer. To master the craft, she needs context, and therefore sets out to explore her roots by traveling to the Orient’s most fashionable cities. Working your way across an attractive campaign map spanning a dozen destinations such as Singapore and Bangkok, you must progress through 96 levels – 8 per stopover – to ultimately achieve success. And, of course, master the all-too-familiar basics of the mostly innocuous outing, which simply involve dragging your mouse to link horizontal, vertical or diagonal chains of three or more flowers, which disappear from play when grouped.

Incredibly relaxed in nature, stressed out owners will find the setup further benefits from the presence of between-mission "zen breaks" that let you stop and stare at glistening lakes and gorgeous sunsets. The chief problem being that, despite the presence of periodically hard-to-reach pieces or obstacles such as blocks that must be destroyed by eliminating tiles around them, meeting your end goal – removing all colored tiles by making matches atop them before time runs out – is seldom difficult, let alone engaging.

Moments of excitement generally come at the expense of serenity as well. The most frequent example: Times when you’re desperately trying to collect a poorly-located tile, but can’t because play’s mercurial nature (eliminated flowers are automatically filled in with randomized replacements instead of existing tiles filling in from above) inherently works against you.

Theoretically offsetting these quibbles are pieces of clothing – buyable before stages start using coins collected through patternmaking – like kimonos, braided hairdos and brocade skirts, each of which bestows one or more of a half-dozen Zen Powers.

To wit, mixing and matching these wardrobe elements doesn’t just cause the heroine to swap out duds and thus change looks right there on-screen. It also gains you access to area-clearing bombs, additional time boosts and bonuses that let you spot patterns more easily or remove all of a single type of title in one fell swoop. The catch being, naturally, that you first need to fill the meter powering each ability by making chains that incorporate occasionally-appearing yin-yang symbols – a process which can take forever in some instances.

Broad range of high points such as dual play modes (including Adventure and Zen, the latter being an untimed option); an exotically endearing audiovisual presentation; user-friendly setup; and online worldwide high score tracking options aside, design hiccups such as these really weigh the outing down, along with minor technical issues, like poor collision detection, causing should-be-highlighted flowers not to respond to repeated clicks. Parents might also want to keep an eye on the title’s Internet connectivity as well: You can only imagine our amusement upon noting that the hometown registered for one high-scorer was listed as "Hell."

As such, for an outing that’s purportedly centered on peace of mind, it’s all too often prone to prompting sudden fits of rage. And unless you’re desperately in need of coma-inducing relaxation, or enthused by the idea of collecting souvenirs like wooden flutes and mandarin ducks – awarded for accomplishing certain in-game goals – there’s little reason to keep at the adventure.

It’s a shame really: You can see the kernel of a smart, catchy idea lying just beneath the surface of the otherwise haphazard tale. Alas, like the delicate, but inanimate flowers occupying the bulk of featured playfields, for now, there’s no sense hanging around waiting for it to bloom.