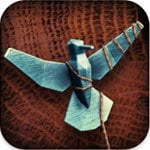 Games, even of the casual sort, are often associated with concepts like frenzy and competition.It's not too often that a video game will strive to create a laid back, almost meditative state of play.Zen Bound does just that.Who would have ever guessed that we'd not only be talking about a game whose entire goal is to wrap objects in string, but that we'd be raving about it?

Each stage in Zen Bound begins with a piece of string tied to a nail. The nail is hammered into a wooden object, which is usually a sculpture of an animal. You'll have a set length of string to work with as you work towards your goal; wrapping the entire object in the string. The string will “paint” the area around the placed string. If the string should move, the paint will disappear. While the ultimate goal for each level is to cover 100% of the object in paint, you can usually complete the level with a lower ranking around the 70% mark. This means that gamers looking to zone out rather than tackle a challenge should have no problem cruising through this game.

If you are looking for a challenge though, a good deal of strategy can enter into the experience. Many animal carvings have angles and shapes on them that can allow you to hook your strings, making sharp turns in most any direction you see fit. Criss-crossing through a turtles legs for example, or pivoting between the crux of a rabbits ears. While that 100% can be a hardcore challenge, especially in the later levels, getting as close as you can is often just as satisfying.

To end a level and accept your score, you need to wrap your string around a glowing nail. This can sometimes prove problematic. There were some occasions I was aiming for 100% and accidentally touched the nail, ending the level. There were other times when I have gone as far as I could and just couldn't seem to get the string to make contact with the nail. It's a shame that this provided so much frustration, because asides from this small snag the game truly lived up to its promise of a zen experience.

The controls leant a lot to this. Taking advantage of the iPhone's multi touch surface, you don't control the string so much as you controlled the object. Rotating and spinning it to catch the string, you simply use one finger to control rotation and two to spin. Tilting your iPhone will control the direction of the string, helping you wrap the object in ways that might otherwise have not been possible. The whole thing feels very natural and intuitive. It's an excellent use of the limited controls offered by the iPhone, and something I hope other games look to when designing their own control schemes.

While boasting that you've just painted a wooden seahorse with some string might seem like something that's pretty low on your bucket list, it's an experience you're going to definitely enjoy zoning yourself out to. With 51 levels and the promise of more to come, you'll be tied up with this one for weeks.