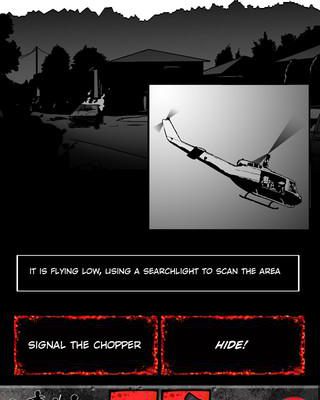 “Man, if I were in the middle of a zombie apocalypse I’d definitely survive. The secret is just to do….” We’ve all had the conversations, either amongst nerds or in our own heads of how we’d traverse the suddenly deadly world filled with zombies. You’d grab certain supplies, hit the road, avoid the cities and keep quiet. It all sounds so easy when you’re not throwing obstacles in your path. ZDay Survival Simulator doesn’t play so nice. Think you can survive when all of your choices sound like they could potentially go bad, and survival seems just out of reach?

The game takes you through a story about a zombie outbreak, filling you in on your situation and then giving a few options on what you want to do. It then takes that answer, gives you the outcome of it, and then poses another question. Round and round you go like this as you gather supplies, fellow survivors, and weapons while trying to not get yourself killed as you make it to safer territory. 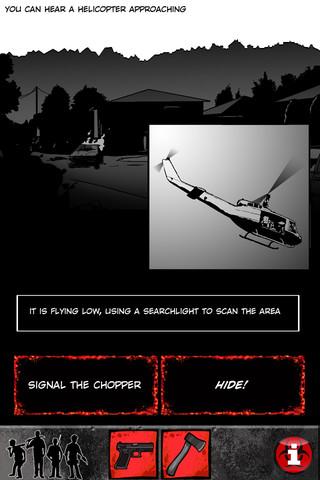 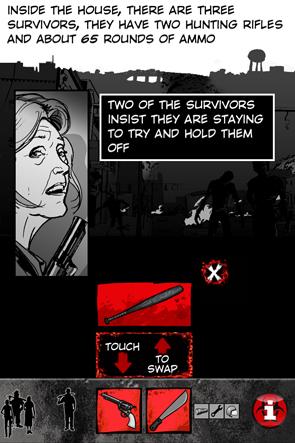 At its core, it’s weird to describe a game with music and graphics as a “text adventure” – but that’s really what it is. The graphics and music (while excellent) are really only there for theme and flavor, something to punch up the storytelling. They add absolutely nothing gameplay wise, which, if you’re a fan of classic text adventures, is a good thing.

It’s sort of like those old Choose Your Own Adventure books, where you’d be given a choice as the bottom of the page, and choosing one would branch the story in a different direction. There’s no middle ground in ZDay Survival Simulator; you’re presented with choices (say, Search for supplies or Run!) and you pick. You’re given a little bit of context, like if you hear zombies shambling around or you see headlights heading your way, but just like if you were in that situation, you really don’t know enough about the current situation to always make the best choice. A lot of times you just have to go with your gut.

Of course, the problem with playing a game entirely made up of seemingly life and death decisions is that most of those decisions are in fact life or death. That means you’re going to make mistakes while trying to get to safety, and you’re going to most likely die when you do. When you’re dealing with zombies there’s really no grey area, you either succeed or you don’t.

That makes the game itself actually pretty tense. As you make it further and further into the story (played out over a series of rounds) you feel like the stakes are higher and higher both because you want to live and see the better endings than “You’ve been eaten,” and because starting over from the beginning isn’t the most enticing idea. 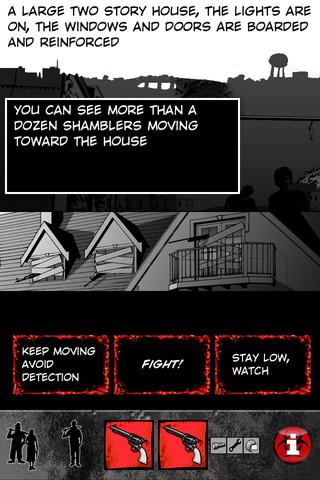 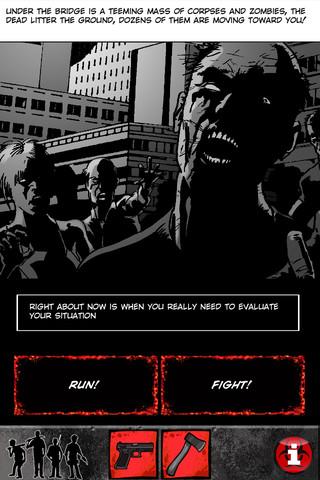 The game doesn’t take long to play through, but since there’s not much in the way of variability in outcomes (it usually comes down to what weapon you have Vs. how many zombies) after more than a few run throughs it all kind of becomes a game of memory, and something real is lost in the process. Still though, there are a bunch of different scenarios if you make different choices each time.

At the end, the game will score you on how well you did in a number of areas like item gathering or survivability. But it’s not really about that. The point is to survive, and anything else feels like a loss.

It’s funny to me that a genre like text adventure could be resurrected and brought to a full color tablet device like the iPad or iPhone. Adding the high-res graphics and fantastic music/sound add a lot to the game, and make it much easier to feel the theme like a weight around your neck than back in the day when it was all just text. ZDay Survival Simulator may not hold your attention for more than a few sittings, but what’s there is fantastic and deserves to be seen.