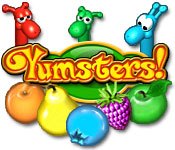 Allow me to explain. In this game from newcomer KranX Productions, you control a group of colored Yumsters. Each one has a craving for a single kind of fruit, meaning red Yumsters eat strawberries, blue Yumsters consume blueberries and so on. In each level, your Yumsters must devour a certain number of different pieces of fruit, such as eight peaches, ten raspberries and 12 pears. To collect fruit, you drag a Yumster from its hole in the ground to the food it likes. While the creature is munching on the treat, you can tend to other matters.

That’s the basic game mechanic in a nutshell, although things get more complex. For example, you can’t cross Yumsters or force them past fruit they don’t like. If a Yumster does collide with something undesirable, it will slip back into its hole for a short time. Although there’s no clock, you lose the level if you allow the screen to fill up with fruit, which appears at random every few seconds. Since fruit that isn’t eaten soon after it materializes begins to freeze, you’ve got to work fast.

The good news is, you can click on unfrozen fruit to return it to an edible state, eat long chains of the same kind of fruit to create combos, click on a Yumster to make it eat faster and swap holes with another Yumster to get a better angle on the fruit you need. All of this is helpful, although additional obstacles exist. For example, small bugs that creep across the screen will send a Yumster sliding back into its hole, while fruit on which butterflies are resting can’t be eaten. Clicking one of the bugs stuns it and turns it around, though, while tapping a butterfly sends it flittering away.

Even more help is available in the form of power-ups. For example, when your Yumster swallows the Double Bonus, the fruit it eats while the power-up is active is counted twice. You can also combine bonuses to great effect. For instance, the Speed Bonus, which makes a Yumster eat faster, is best paired with the Super Yumster Bonus, which allows a Yumster to eat any kind of fruit. My favorite power-up is the Bendy Bonus, which allows you to twist your Yumster every which way but loose to reach the fruit after which it hungers. Altogether, there are nine bonuses, all of which add a level of light strategy to the proceedings.

You also collect coins — one for each piece of fruit you eat and one for every spot on the map that doesn’t contain fruit when you win a level. Coins are used to purchase instruments for a mini-game in which you hit colored notes with your mouse cursor as they pass through the matching sections of your screen. The mini-game appears as you move from one location to the next.

Speaking of locations, there are five in Yumsters, all of which look nice. Examples include a forest, a desert and a frozen wonderland. Altogether, you’ll have to beat 57 levels to see the end of the game.

That might sound easy, but when you combine the time it takes for a Yumster to eat a piece of fruit with angling for position, keeping enemies at bay, clicking on fruit to keep it from freezing and grabbing bonuses, this is one hectic game. Spurring you on, however, are several trophies for performing special feats, such as eating a nine-fruit combo or winning a level with no frozen fruit.

I have good things to say about Yumsters. From its cute characters to its colorful graphics, the game is a pleasure to look at, even if you won’t have time to enjoy all of the bells and whistles while you’re trying to control a half-dozen Yumsters at once. Also, the audio remains clear and keeps you informed, despite everything that’s going on. And the level of difficulty never goes too far, but manages to be challenging without being unfair.

The best thing about Yumsters, though, is its originality. True, you’re matching red Yumsters with strawberries, but this is no match-three game; and while your wormy friends might disappear into a hole from time to time, they’re not playing seek-and-find. During a time when casual game developers are pumping out clones at an alarming rate, even a simple idea like the one behind Yumsters can be refreshing. I did set Yumsters aside every few levels due to boredom with doing the same thing over and over, but before long, the positive attributes I mentioned above would draw me back.

Now that this review is done, I’m turning in for the night. I need sleep because the early bird gets the Yumster, and I don’t want to miss out on the fun.