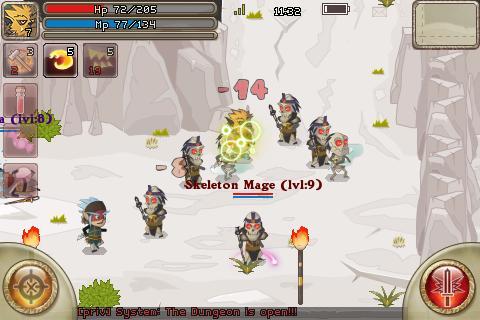 Fantasy MMORPGs are becoming increasingly-common on the iPhone, which means that developers are faced with the daunting task of producing something that is simultaneously well-made and memorable. French developer Moving Player’s new MMO Yslandia, thankfully, manages to achieve both of these feats, though it does have a couple of technical hiccups that need to be addressed.

The game is set in a fantasy world that is (currently) composed of three massive islands. One is controlled by the Simeh’a Alliance (good), one by the Zaa’me Coalition (evil) and the third landmass is a contested neutral ground (meaning a ton of PvP action happens there). When you start the game you begin on a tutorial island, which forces you to go through a series of brisk tutorials and won’t let you leave until you’ve reached level 10 or so. While veterans of MMOs like World of Warcraft will probably be a little bored (since they’re old hands at games like these), these early missions are useful for those of us who need some help getting familiarized with the game’s various controls and systems.

The game alternates between small interiors and larger open areas which you can explore at leisure, and features a tap-and-go navigation method – though if you hold your thumb down on the screen a virtual thumbstick will appear that will let you move your character on the fly.

What immediately struck me about Yslandia was the detail that’s gone into the world. There are six races and 18 classes (three per race) to choose from when you first start playing. Each of the races and classes look completely different, and there’s a lengthy backstory provided when you scroll through them at the character selection screen.

As opposed to many other MMOs, which often rely on level-grinding to make the majority of gameplay, Yslandia emphasizes team-based PvP battles. These are fast-paced strategic affairs requiring you to work together with guilds. Granted, the first few hours of the game are dominated by single-player-friendly quests, but these are relatively easy to get through, thanks in large part to clear instructions and a useful world map that shows you where to go.

This is a game that just shines with a high amount of polish. Both the sound and graphics are phenomenal… especially the graphics. Aside from some simply stunning concept and character artwork on the various menus, the game’s cartoon-like visuals are lovely, featuring some beautiful environments and higly-detailed character sprites.

One of the coolest aspects to the game, though, is the fact that its interface is customizable. When you’re looking at your character’s inventory screen, you can hold down on an item until it starts to vibrate -much like you would when you want to move an App on your iPhone- and then you can drag the item anywhere on the game’s screen that you want. It’s amazing how such a small thing can make a game so much more enjoyable. 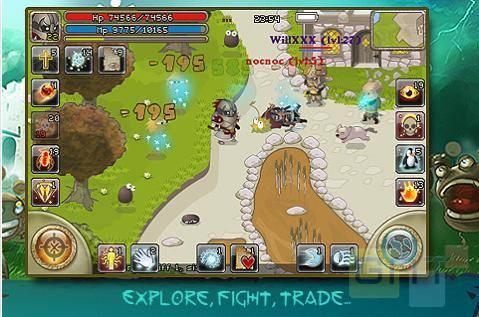 At the moment, there are only three servers to play on. The problem is that they seem erratically stable at best. During my time playing the game, I wound up getting disconnected a few times and would sometimes have to login on a different server. It was a bit frustrating, especially when I had to start over from scratch with a fresh character on a new server. After a while, though, I was able to flip between characters whenever I lost a connection.

The other problem I noticed with the game is that it’s a bit on the slow side. When you first start it up it’ll take a while to load all the data; you’ll have to spend a minute or so with “Loading Characters” flashing on your screen before the game itself actually starts, even if you’re playing on an iPad or iPhone 4. I also noticed a delay of a second or two when I was trying to engage in actions or scroll through expository texts. Finally, there was some noticeable lag at times when multiple players were on the screen, though this wasn’t always the case

For the most part, Yslandia is a great MMORPG for the iPhone. While it could certainly benefit from some more stable servers, this is a well-made game that features some stunning production values and manages to incorporate some great customization features. With a little more work and maintenance, I could easily see this becoming a truly fantastic title.