Your Doodles Are Bugged Review 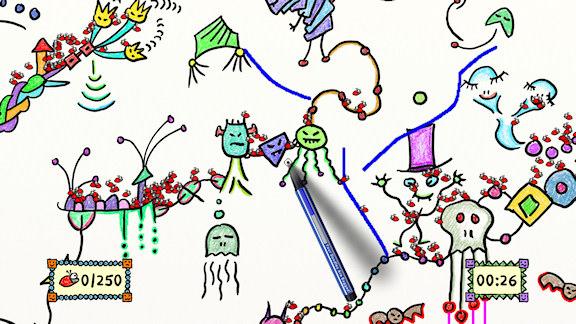 Your Doodles are Bugged! has a dull story mode, but the game is made whole by a fun level creator.

Your Doodles Are Bugged! is a puzzle game for the PC that proves the pen is mightier than the sword…sometimes. What starts off as an entertaining and underused concept for a puzzle game quickly gets a bit bogged down by some bugs, pun intended. But those who have the patience to plow through a long, boring story mode will gain full access to an amazing level creator, easily the best feature this game has to offer.

Similar to the concept of classic puzzler Lemmings, the objective in Your Doodles Are Bugged! is to lead a set number of mindless bugs to the pot of honey that sits somewhere on the screen. The two entities are separated by a full sheet of paper and all the doodles that inhabit it. Equipped with nothing more than a blue pen, you need to plot a path for the happy-go-lucky insects. It’s certainly not a difficult process to grasp, but the difficulty comes from execution.

The game’s 24 story levels start off incredibly easy, but the difficulty suddenly spikes, and you’re left having to quickly change your gameplan. When I first noticed I had a limited amount of ink, my mindset shifted from “this is far too easy” into “how do I need to do this?” I realized I could erase ink and replenish my supply, but it was at that point I learned that some of these levels are really long. The easiest (and perhaps only) way to beat some of the stages is to ship your bugs in groups, taking a handful to the honey at one time, then repeating that process. Luckily, there’s a fast forward option, as well as the ability to save a single checkpoint when you desire (in case you screw up), but many levels still feel as if they take much longer than they reasonably should.

Limited resources are hardly the only obstacle you’ll come across. Many of the doodles are rough terrain for the bugs to cross. Large gaps and unclimbable surfaces both put the bugs into a bit of a pickle at times. There are other hazards and obstacles on the field as well. Poison surfaces will kill bugs on contact, oil will block out your ink, and teleporters shift the bugs to a different area of the screen. You’ll need to use all your intellect to work around these obstacles. They provide an excellent challenge, but never feel unfair or broken.

What does feel unfair or broken are the bugs themselves. The game feels, frankly, quite buggy at times. The bugs do their best to hop up ledges, and over gaps. Typically, if they cannot make it over a ledge, they’ll turn around and jump the opposite direction. This enables you to make staircases and vertical paths. The issue is that a bug will occasionally not jump, or sometimes miss his target, despite his friends all hitting it. This is an anomaly and the same bug generally won’t miss his jump more than once. 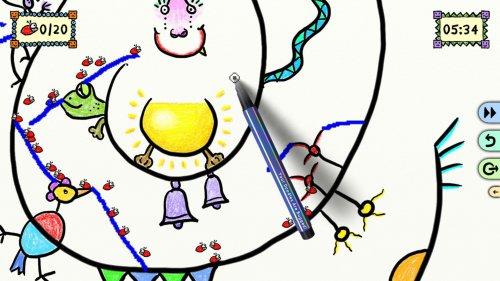 It’s far more frustrating when bugs get stuck. Sometimes, even on the early parts of a stage, a bug will find his way into a place he can’t get out of, forcing you to restart. Early in a stage, that’s tolerable. When a bug takes an abnormal jump into an awkward position late in a level, it’s harder to take that in stride.

Your Doodles Are Bugged! is filled with quite a bit of content. There are 24 story levels, which will give you more than enough of a challenge, but aren’t too fun. The best feature is the “Doodle Studio,” which gives you more pre-made levels, and lets you create your own levels with items you unlocked through the story mode. Custom levels can be exported and shared with the rest of the community. The creativity and challenges that come from importing custom levels—along with the ability to make your own—make the Doodle Studio the reason why you keep playing.

There are a few other features, as well. There’s a free play mode that gives you one thousand bugs and unlimited ink and let’s you throw caution to the wind. Many of gaming’s staple features also appear, such as leaderboards, achievements, and multiple languages (English and German).

Your Doodles Are Bugged! has some gameplay issues at times, but is an otherwise enjoyable experience. Those with little patience may become bored at some of the long levels, or they may get frustrated by the challenges they’ll face. Those who persevere will be rewarded with a ton of customization options in the Doodle Studio. It’s a bit of a shame you need to play though a somewhat dull story mode to unlock the Studio’s full potential, but it’s well worth the time and effort. I can’t help but think that this game would have been so much better if Spyn Doctor had put less emphasis on the story, and more on level creation.

Azkend 2: The World Beneath Review