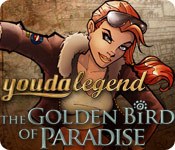 Playing Youda Legend: The Golden Bird of Paradise, the second game in the Youda Legend series, is like driving a Chevy Malibu: It’s competently built, reasonably reliable and comes with all the usual hidden object game options. But if you’re looking for anything more than that, like soft Corinthian leather or any sense of style and excitement, you’re in for a disappointment.

The Golden Bird of Paradise opens with the player embarking on a vacation to recover from the stresses endured in the previous Youda Legend game, The Curse of the Amsterdam Diamond. But the much-needed R&R is quickly sidetracked when a visit to a fortune teller sparks a journey that will lead to remote tropical islands, through ancient temples and eventually the discovery of a long-lost tribal civilization. It sounds impressive, but don’t expect an overly coherent tale to be told; the tale of the Golden Bird is little more than a rickety framework upon which to hang a series of hidden object searches and other mini-games.

For the most part, The Golden Bird of Paradise sticks with the tried-and-true hidden object formula, opting for the comfort of familiarity over the risk of innovation. For players unfamiliar with the genre, the game introduces its conventions in the first level with a simple but thorough tutorial on the various aspects of the game. A generous hint system, meanwhile, helps ensure that players won’t spend too much time stuck on searches for obstinately elusive objects.

Players must search for random items hidden throughout levels ranging from airports and beach houses to jungles and crumbling ruins. Most are of the find-and-forget variety, but a few, like map pieces and tools, will automatically be stored in the player’s inventory for use later in the game. Also waiting to be found are "gems" that will add to the player’s score, although oddly, the game says nothing about how many there are in each level.

In a half-hearted stab at variety, every now and then an extra action will be required to progress through the game, such as screwing a light bulb into a lamp to reveal another object. Some items in the inventory will also occasionally have to be "prepared" before they can be used, a process which usually involves dragging one object to another in order to combine them.

The visual quality of the levels and animated interludes are solid, although the insertion of cartoonish, hand-drawn characters on top of the photo-realistic backgrounds can be jarring. Fortunately, it’s a relatively rare occurrence, with minimal impact on gameplay. The music, meanwhile, is the sort of pulsating, urgent beat that floats in the background of so many hidden object games, serviceable but unremarkable.

The game does suffer from a few minor flaws, including a couple of spelling errors and the tendency of the inventory screen to pop up unintentionally when the pointer is moved too close to the bottom of the screen. One of the levels is surprisingly dark, which may fit its tomb-like underground setting but is hardly conducive to gameplay, and the Golden Bird of Paradise can occasionally be a bit vague about what it wants, such as when it asks the player to find "blackbird pieces" but gives no indication as to what they actually are. (For the record, they’re blobbish-looking pieces of colored glass.)

The real problem, however, is the difficulty. Some of the hidden objects are simply too small, dark and/or nondescript to be found unassisted and more than once I had trouble nailing them down even after the game’s hint system had pointed them out to me. They’re not cleverly hidden, they’re just incredibly difficult to see. It’s a fine line, yes, but at times it feels like the game is cheating, or at the very least playing dirty, which can lead to some very frustrating moments.

Youda Legend: The Golden Bird of Paradise isn’t really a bad game, but neither is it a particularly good one. Some of the between-level puzzles are respectable brain-teasers, but others are just filler and a few are downright tedious. The object searches, meanwhile, are decidedly average and feel not so much challenging as simply hard to finish. And with only about three hours of playtime, there’s not enough quantity to make up for the unimpressive quality. Like the aforementioned Chevy, there’s nothing specifically wrong with The Golden Bird of Paradise, but you could do a lot better elsewhere.