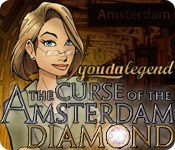 In Youda Legend: The Curse of the Amsterdam Diamond, the first hidden object offering from Youda Games, you’ll travel to Dutch country to the capital and largest city of the Netherlands. You begin your trip in Amsterdam looking for a place to stay, getting settled in a hotel room and finding yourself in the middle of a mystery. The story is like stepping into the middle of a conversation without any context, yet in spite of the mysterious plot, little dialogue gets in the way of enjoying the crisp scenes and variety of puzzles.

You move through the game in a linear path. You find a brochure from a hotel, so that’s where you head to stay. There, you find a map, and a spot appears before your eyes. Naturally, you go there. The game works like the domino effect. You goal is to find all the hidden objects in the scene, with some entering your inventory for later use. Then, you’ll have to solve a puzzle with whatever is in the inventory. Then it’s on to the next location.

Four scenes into the game, I still couldn’t figure out the story – not even the part about the diamond and a curse. Instead, I discovered that replaying a game without creating a new player erased my score and statistics. Also, some items on the list of things to find do change when playing again, but inventory objects stay in the same place.

You also have the challenge of trying to find every little diamond in the scenes. How many diamonds? Who knows? While the found diamonds settle around the border of the game, you can’t tell how many remain. At the end of the game, the statistics tell you how many diamonds you found with no idea of how many you missed. The diamonds also activate the hint meter, yet it needs to recharge after every use.

Confusing hint system aside, the seek-and-find part of the game works beautifully. Sure, some of the scenes appear dark, but Youda Legend never tricks you by hiding an object in a dark area. A couple of items hide too well, but it’s not because of the darkness. The objects blend well with the scene for the right amount of challenge. Although you can find many things easily, the balance is enough so you don’t feel unchallenged or frustrated.

After crossing off every item on your list, it’s puzzle time. No two puzzles are alike, so you’ll have fun discovering what you’ll do in the next puzzle. Puzzles have you turning keys until you unlock the door, moving amulets around a map to learn of your next destination, and sliding latches to open four locks to name a few without giving away the best part of Youda Legend. The puzzles come with their own hints at the cost of points. Sometimes the hints help and other times they don’t.

The scenes somewhat reflect Amsterdam as you visit famous places like Carré Theatre. The game could use a little more Dutch flavor, though. Youda Legend comes with a feature not seen in many games: seven language options that let you play the game in Dutch, French, German, Italian, Spanish, British English or US English. Maybe you can play the first time in your primary language and then play again in a different language for kicks and learning.

I finished the game in a short 2.5 hours. Although the game has original puzzles, it could go longer with more hidden object scenes and some back-story to explain what’s happening. Found objects disappear slowly that you can click five items before it removes two items from the scene. You might wonder if the game froze after finding all the objects in a scene as the game takes its time loading the next scene or puzzle. If you play windowed mode, you’ll have to live with it stuck in the upper left-hand corner of the screen because it won’t let you move the window. Oh, and it asks your gender when entering your name, yet it never comes to play.

Despite some perplexing quirks, Youda Legend: The Curse of the Amsterdam Diamond has a nice package of sounds, graphics and puzzles. While this one won’t become anyone’s best friend with its rough edges, it’ll spark some interest while others might find it dull.