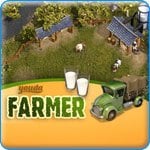 Youda Farmer has a lot going for it: above average graphics, realistic sound effects, and gameplay that puts a new twist on farm-themed time management games. There’s one problem, though: unless you use a very specific strategy that involves lining up actions ahead of time, the pace will become hopelessly hectic by level six or so.

The game’s tutorial doesn’t bother to explain this, which is a shame because a lot of frustrated people will no doube give up on the game prematurely. Once you’ve mastered the right technique, however,  Youda Farmer is perfectly playable and definitely worth a look.

You’ll start by choosing the color of your truck, and your gender (your character can be male or female). There’s no story, so you’ll jump right into the action, a two-part process that involves harvesting various goods around the farm such as flour, eggs and tomatoes, and then delivering them to town on your truck and selling them to the local shop owners.

When an order appears at the bottom of the screen, clicking on it causes the screen to scroll to the area of your farm that you need to interact with in order to fill the order. Clicking an egg, for example, will scroll to the chicken coop. As the chickens produce eggs, you’ll have to drag them into open crates so that they’ll be loaded onto the truck as it rolls by. You can click ahead and fill more orders while waiting for earlier ones to be filled; in fact, this is essential for keeping up with the game’s hectic pace. If you don’t click fast enough, orders will disappear. If you drop too many orders, you’ll have to try the level over again.

Gameplay is similar in town; here, you click on each merchant to send the truck to their store, and then click on specific pieces of produce that appear in thought bubbles above their heads to deliver it. Finally, you must click on the coins that are left behind – again, you have to be quick or both the goods and the coins will disappear. Yep, it’s a whole lot of clicking.

Collecting enough randomly-appearing “party produce” – literally, food wearing party hats – allows you to participate in a bonus level where you have to click on produce as the truck drives around. If you’re one of those people who gets motion sick due to scrolling screens, beware! It’s a reflex-based click fest that might frustrate people with slower reflexes, but it’s just a bonus level that gives you a chance to earn some extra credits and has no bearing on your actual progress.

By delivering goods and stringing bonus chains together (i.e. collecting three or more of the same kind of produce in a row), you earn credits to upgrade the farm. Adding a chicken coop, for example, lets you collect eggs, which means that the baker in town can upgrade his store to make cakes, and buying a pig stable results in a grocery store appearing in town where the grocer can serve breakfasts of bacon and eggs to the villagers. You can also invest in more efficient harvesting machines, more crates, a larger and faster truck, and even a new paint scheme for the truck (I was partial to hot pink).

Where Youda Farmer shines the most is in its graphics. The environments are detailed and sound effects are realistic – you’ll enjoy hearing the realistic chug of the truck’s engine as it putters around through country roads, over bridges and around fields on its way into the cobblestoned streets of the town. And with each upgrade you buy, you’ll see a black and white map come to life with color as your farm expands into new areas.

On the other hand, Youda Farmer feels like it could have been fleshed out and balanced a touch more. With no story to drive the game forward, the only thing to look forward to is upgrading your farm – but in truth there aren’t all that many upgrades to keep players satisfied. The ability to paint your truck different colors was a great start – but how about more of that? The ending, too, is a letdown. In terms of replay value, you can start over from the beginning if you want to, but don’t expect anything to have changed. All in all, the game offers perhaps three or four hours of play.

If you like your time management games fast and hectic, and have the reflexes to prove it, then give Youda Farmer a try. It certainly looks great and, once you’ve hit on the right strategy, plays great as well.