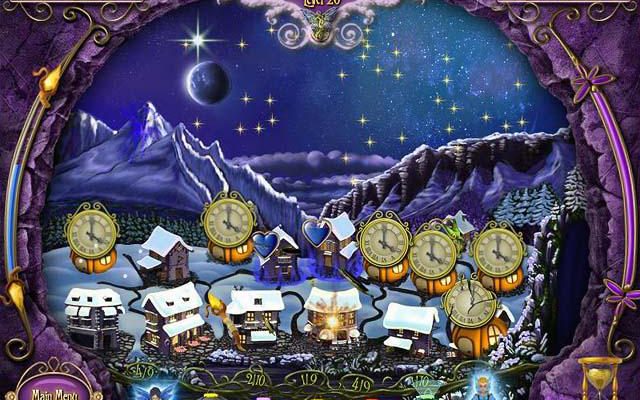 Did you know that the best way to lure a fairy out from hiding is by collecting fireflies? Or that fairies are the key to maintaining happiness when you live in a cozy mountain villa? Ok, I didn’t either, but that’s the general idea behind Youda Fairy, a magical minded fantasy time-management game that will undoubtedly test your reflexes and your patience. As a new wizard in training, you’re about to get handed over stewardship of an entire village, so it’s time to get schooled in the ways of fairy magic mojo.

For over 1,000 years, a wise old wizardly hermit has watched over the people in the kingdom and kept them safe with the help of his fairy friends. Considering that’s a long time to be stuck on benevolent guard duty, the sagely gentleman finally reckons his journey into the great starry sky beyond is long overdue, and he’s chosen you to take over as his successor. Since he can’t leave until he knows his people are well cared for and protected from the local evil witch and her minions, you’ve got a long journey ahead of you in order to learn the ropes and become a mighty magical defender. 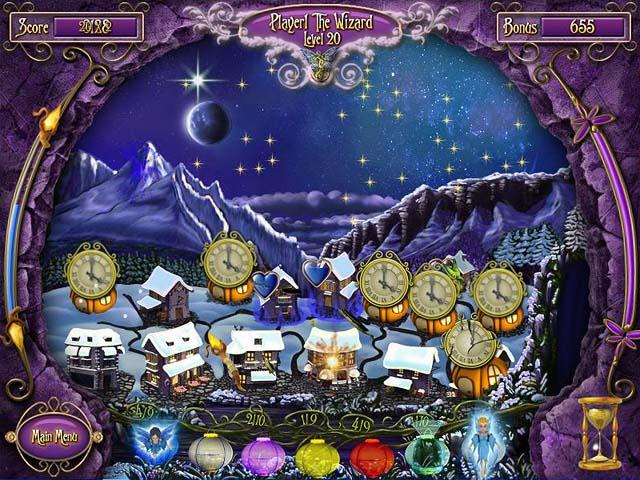 The main portion of Youda Fairy‘s gameplay takes place in a series of wooded wetlands where fireflies dwell. Your goal in these remote areas is to collect different fireflies using stretchy lily pads. Clicking on a firefly with a selected lily pad makes the flower on top of it shoot outward to snatch up the glowing critter, but it will only keep fireflies that match its own color. Capturing several of the like-colored glow bugs with a given flower lets you morph them into a fairy, which must be captured and manually dragged into a glowing lantern container for later use.

You’ll start out catching only a few different colors of fireflies, but the number of different colors you must juggle grows as other distractions are introduced. Some fireflies have spiky shells that protect them from being nabbed and temporarily disable your lily pad if you bump into them. They can only be collected after you’ve popped a lightning orb near them to break the shell. Sometimes small frogs and lizards also bound their way onto your pads, and you have to clear them off with a quick mouse click or face having your lilies trampled. Then there are the giant, hungry toads that snatch wandering fireflies for a quick snack.

For every obstacle the game throws at you, it also gives you a means to deal with it. Friendly spiders that hang out in the tree line at the top of the screen can be called down to your lily pads and then used to web up all of the fireflies of a matching color in one fell swoop. If the nearby trees stop belching out fireflies, you can use a magic spell to summon more in order to make enough fairies to proceed. Other spells deal with additional challenges you’ll face further along in the winding path of wizardly tutelage. As you play, you’ll accrue stardust that can be used to buy upgrades your castle. Each upgrade affects the gameplay, like boosting the patience level for fairies that flit about after they’ve been created and speeding up spell recharge time.

Once you’ve met your fairy crafting quota in a string of levels, you’ll eventually make it to village areas that provide another mini-game that’s akin to a boss battle of sorts. Now that you’ve captured all those colorful fairies, you have to release them into the village to grant the townspeople’s wishes. This is done by selecting the matching fairy container and clicking on different colored hearts that pop up over individual houses. However, the beastly witch doesn’t want you to succeed, so she zaps houses with spells, cast locks on your fairy jars, and tries to thwart your good deeds in other ways.

Youda Fairy is a pleasant looking game with a nicely designed interface and a fun fantasy concept. However, it often asks you to juggle too many things at once. Mixing this potentially stress-inducing chaos with imprecise controls yields moments of frustration that gradually heightens as you’re saddled with more responsibilities. Switching between different colored lily pads is slow and awkward, and wrestling with the controls when there are many fairies to catch and many other things to pay attention to simply saps the fun. The game sets some really interesting gameplay ideas into motion, but it has quite a few kinks still to be ironed out.