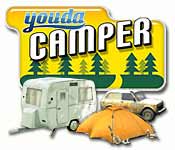 As professional critics, we thought we’d seen it all: Outings that ship half-finished in broken English, titles featuring the unlikeliest concepts, a flood of carbon-copy hidden object challenges… Then along comes Youda Camper to raise a few eyebrows. While the concept of accessible, real-time simulations unto itself no longer remains shocking, as proven by the success of offerings like Build-a-lot 2, it’s the bizarre execution here that’s really got us scratching our noggins. You see, this is the first game billed as a casual offering that, in many ways, well… isn’t.

At surface value, laying aside obvious inconsistencies, (What’s a Youda; Why’s the game called Camper when you don’t play one; how come "thrash is piling up" instead of trash and buttons have "functionalities" not functions; etc.) we can afford to be forgiving. While the overall theme is semi-mainstream at best, with players getting to "create the campsite you’ve always dreamed of" (does anyone really dream of that?), we’ll concede that at least playing campground owner beats, say, frazzled scientist, doddering granny or slimy insect, as we’ve seen in other recent desktop amusements.

But dig deeper into the actual realities of the venture – a semi-complex business sim that sees you constructing tents and motor homes, laying down parking spaces, building discos and bingo halls, setting sales prices and handling regular grounds maintenance/upkeep – and the subject matter reveals itself to be surprisingly hardcore.

Play itself isn’t any easier to wrap one’s head around. Given limited instruction and feedback presented in Pidgin English – although you can always wade through landscaping, reception and construction menus to find the needed button or tool – you’ll essentially perform a giant juggling act.

The goal is to quickly find open accommodations for campers who arrive in a steady stream, get them to agree to your fees (which can be changed on the fly) and then respond to any complaints which arrive by way of notice from a smarmy male employee. Meeting goals – e.g. pleasing an ever-greater number of customers or building certain structures like football fields and fireplaces – is made trickier by the need to keep adults, teens and seniors well-spaced out, as well as keep parks free of litter, well-lit and in something resembling operating shape.

Unfortunately, it’s all a little much to swallow at once (a process unaided by a Spartan tutorial) for novice-level players. Worse, sifting through menu screens and sourcing info on camper happiness levels becomes even harder to do the further you progress into the title, due to the user front-end’s generally unintuitive nature and game’s increasingly tight time constraints.

Junky, low-res bird’s eye-view visuals offer sweeping panoramas of nearby scenery and camp activity (hooray for tiny, featureless people and static buildings), aiding in the overall design and architectural planning process. But, as reinforced by the lackluster sound library and unintuitive interface – good luck remembering which drab beige lot represents which type of tent when patrons file specific requests, or determining when prices are set too low/high – there’s little charm or logic to the experience.

Granted, it’s nice that the creators added peripheral features such as options for advertising to attract more customers and offer a setup that’ll also appeal to those interested in time management challenges. However, given a wholly unmemorable presentation and largely monotonous action – you seriously never know when campers will leave and pay up, and they take forever to do so – beyond unlocking new buildings and additional land to occupy, there’s little incentive to keep at the adventure.

Bearing this in mind, it’s best to try before buying. It’s a shame really… We’re all for developers branching out and exploring the possibility of interpreting new genres in original and more accessible ways for a broader audience. Nonetheless, Youda Camper lacks elegance and simplicity, two qualities essential for success in today’s casual market, meaning all but the most ardent desktop enthusiasts will want to seek other ways to experience the magic of the great outdoors.