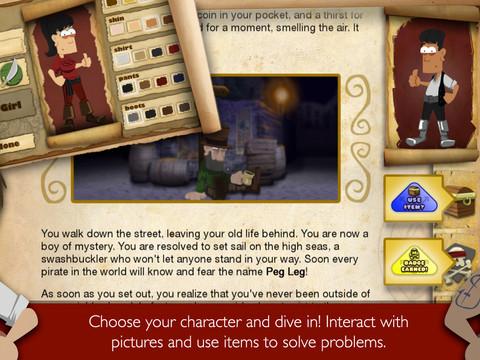 Remember when gamebooks really were just for kids?

The mobile format is a natural evolution for old-fashioned game books. Much as I love them, I have to recognise that the market is partially driven by the nostalgia of grown-up nerds like me who enjoyed them in paper form as teenagers. But here’s a novel idea: a gamebook app aimed not at reminiscing adults, but actual children.

You’re likely familiar with the basic gamebook idea where at the end of each section you’re presented with two or more choices to drive the story forward, meaning the plot you follow is different on each play-through. You Choose: Pirates offers some kid-friendly alterations to this basic format. There’s never more than three choices. There’s no external mechanics (such as combat) to worry about, keeping the focus on the story. And the text, naturally, is written with a younger audience in mind.

However, the key change isn’t in the way the app operates, but in how it’s supposed to be played. Most gamebooks have a relatively narrow range of “correct” options that lead eventually to a single victorious ending, and the goal is to replay until you reach this climax. You Choose: Pirates doesn’t follow this convention. Instead there is a very large number of successful and unsuccessful endings. The paths through the book are mostly fairly short, and its replay value comes from a desire to explore rather than to win.

It’s a clever design choice that makes it very suitable for children. There’s little chance of frustration, or the expiration of limited attention spans in trying to work out the right way through the book. Instead each short path weaves its own little story. If the one you’re on happens to end badly, you can simply flip back one or three sections and make a different choice.

The plots are varied, engaging, and amusing, and discovering them is often fuel enough to encourage experimentation. If further motivation is required there’s a badge system that rewards not just finding the good endings, but the bad ones too, and also many of the more memorable scenes in the book. There’s plenty here to keep kids ages 6-9 engaged for a goodly while.

To provide relief from the reading and choosing, which may tax those still learning how to read, there are occasional mini-games that unlock new choices and badges. These are the only point in the app which can potentially lead to disappointment: some seem a little difficult for the lower end of the age range capable of handling the text. But if you’re happy to step in and help if required, then you’ll find them pleasingly varied.

Walls of text are further punctuated by cartoon illustrations of the wicked pirates and sea monsters that are encountered during journeys through the book. These are bright and evocative and exude a funhouse-style appearance. Players also get to create their own avatar in the same style at the beginning of their adventure, which can acquire additional embellishments as they progress through their chosen plot.

The sound is less inspiring. While there are some good effects such as snoring pirates and rattling treasure, the music, for the most part, sounds like it was produced on a cheap synthesiser, and occasionally verges on the discordant.

The other major downside was the presence of significant amounts of advertising on plot-ending screens. It’s entirely for the developer’s other products but is frequent and imposing enough to be very annoying, especially in a paid app. Exhortations to purchase expansions or click “likes” on Facebook are especially egregious, especially when many of the players will be too young to understand and will simply be confused when a clumsy touch takes them out of the app. 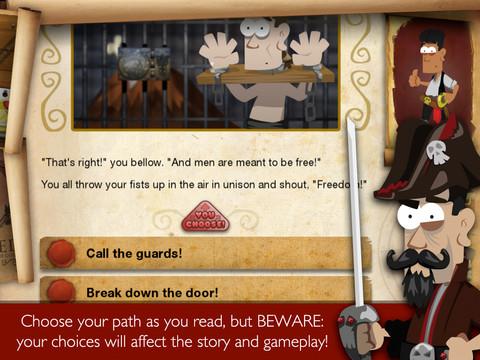 Overly-aggressive marketing to a young audience is a pretty unpleasant thing to find in an app, but aside from that I can’t find much to fault here. The gamebook oozes charm and character, is well-suited to its audience and is a lot of fun to play through over and over again in search of the more elusive badges. And for the adult gamebook fans amongst us, it’s hard to resist the added draw of a potential stepping stone up to the hard stuff like Gamebook Adventures and Fighting Fantasy for little gamers in the making.

The Last One Review