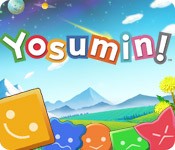 Square Enix’s Yosumin! began life in 2006 as a Web-based game in Japan that ran in Internet browsers. A year later an enhanced version was released for the Nintendo DS — again, only in Japan. But now this simple but addictive puzzler has finally been published in North America through several casual games portals.

There’s no real narrative in Yosumin!, just a rapid succession of hundreds of stages—some of which are as short as a few seconds and others of which can stump players for half an hour or more—and a healthy helping of cutesy Japanese design (we’re talking bright pink loading screens, kitschy emoticon-style playing pieces, and feverish music that could have been pilfered from a TV game show).

The object of each stage is to satisfy a set of target objectives before a timer bar runs out. That usually means clearing certain kinds or configurations of Yosumin—the name given the smiling playing pieces that appear in the game’s square, black play area.

Clearing Yosumin is simply a matter of finding four same-colored pieces that form the corners of a rectangle and clicking on two diagonal corners. The rectangle could be as small as four Yosumin that are touching one another in the form of a square, or as large as the entire game board. Once a rectangle is made, all Yosumin inside are switched to the shape and color of the corner pieces, cleared from the board, and subtracted from your target objective.

It’s child’s play at first, with players zipping through whole sets of stages in just a few minutes. But things slowly become much trickier.

Additional colors of Yosumin are gradually introduced, which means the odds of finding four of the same type that create the corners of a rectangle drop substantially. At the game’s outset, when we must contend with only three types of Yosumin, it’s a piece of cake, but by the end, when six are in play, you’ll often spend long, agonizing seconds looking for four matching corners.

Then there are the modifier pieces; rare Yosumin that usually make your life harder. Giant Yosumin, which take up the space of up to nine regular-sized Yosumin, can significantly reduce your chances of finding a match, while spiky black Yosumin will reshuffle the entire board if they happen to be inside the rectangle you create.

But the game’s designers have provided some strategic aids as well. Clear Yosumin of the same type four times in a row, for example, and all Yosumin of that type will disappear, making the game much easier for a short span. There are also some helpful Yosumin, like those with wings that the player can move, and golden Yosumin that the player can use as a sort of wildcard.

Plus, as your running total of cleared Yosumin increases you earn a dozen different “treats” that can be activated for individual stages. One makes it more likely that Yosumin of a particular type will appear in the board’s four corners, while another reduces the likelihood of those troublesome large Yosumin showing up.

Indeed, the game’s unexpected depth of strategy is pleasantly surprising, and helps keep the experience feeling fresh for several hours.

Thing is, Yosumin! lasts a lot longer than a few hours. Depending on your proficiency, it could take up to ten hours to work through the primary Adventure mode. That’s a lot of rectangle making—especially considering that there are no between-stage mini-games or significant narrative sequences to spice things up. And without the ability to save between individual stages (the game only marks your progress between sets of stages), folks who tend to play puzzle games in short bursts will likely find themselves spending plenty of time replaying stages they’ve already completed.

There is a secondary mode dubbed “endless” (which is something of a misnomer, given that it does indeed end—and within 15 minutes or so, unless you’re exceptionally skilled), but it’s merely more of the same sort of play encountered in the Adventure mode. The only difference is that stages aren’t broken into sets; they just keep coming until you fail one.

Staring at Yosumin!‘s colorful, multifaceted boards looking for matching corners I sometimes felt as though they were questions in a strange sort of I.Q. test, designed to measure a person’s ability to quickly discern a particular sort of pattern. It’s safe to say players who are good at these sorts of visual brainteasers will likely enjoy this game—assuming they don’t mind doing them over and over again.