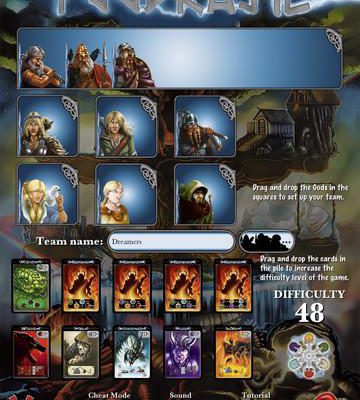 Even the gods struggle to win some battles

Yggdrasil is a cooperative board game turned iOS app in which you’re in command of an army of Norse gods including Thor, Frey and Odin. Your job is to fight back evil creatures from Norse mythology, like Loki, the wolf Fenrir and the serpent/worm Jormungand. Man, those names are a mouthful! It may sound easy, since you’re in control of gods and all, but the denizens of Hell aren’t going to topple so easily.

Since it’s based on a cooperative board game of the same name, I already know it’s in my wheelhouse. I’ve been a big fan of the board game to tablet movement, if for no other reason than I get to try out more board games than I ever would otherwise (and for much less money too!) Yggdrasil is actually a perfect example of this, since I seriously doubt I’d be able to get enough of the right kind of people together to play it.

This one seems very well implemented too, taking all the right cues from the board game as inspiration. The visual style is colorful and quite lovely, with all the elements and graphics taken right from the original game. The board looks more like a painting than a playing surface. It’s really unlike any other board game I’ve seen, and that makes it really stand out against the other analog-turned-digital games on the app store.

I’m not going to go too far into the rules, since there’s quite a bit to handle, but here are the basics. Your mission is to hold off the bad guys until you exhaust the deck of enemies on the board. Each of the 6 baddies are relentless in their attacks on Asgard, with one of them marching ever closer to your castle on each turn.

The path to the castle is separated into eight spaces. You draw an enemy card at the beginning of each turn and move that monster forward one space and apply their negative effect (each monster has some nasty ability to force on you). If five or more monsters pass a certain line, you lose. If three or more pass a farther line, you lose. If one monster makes it into the castle, well, you get the picture.

Luckily you have all of Asgard at your disposal to help repel the invaders. You’ll take 3 actions over the course of each turn, invoking different areas of the board (and the special ability of the god whose turn it is) in order to best fight back. There are 9 areas of the board you can activate as part of an action to do things like call in elves to fight with you, have the dwarves provide you weapons, or fight frost giants to gain runes. Stand a fight long enough to exhaust the enemy deck and you win! 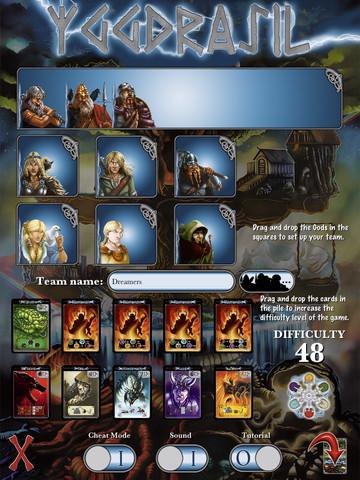 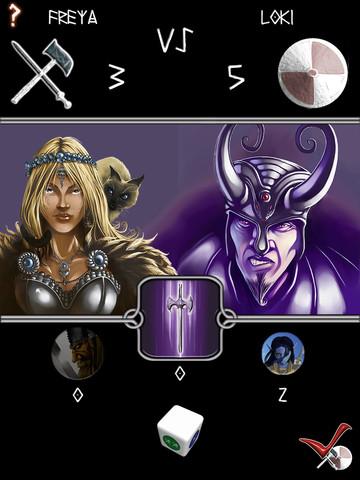 The really unfortunate thing about Yggdrasil is just how daunting it first appears to be, and how the included tutorial really doesn’t take adequate steps to make you feel like you really have a grasp on the situation. You’re given a few blocks of text to read then they kind of throw you into it without much idea on what you’re supposed to do.

As you tap on various areas it does pop up a screen to explain what that particular action will do, but since you really have no idea where to start you’re left not having any clue if what you’re doing is the right thing or not. A little handholding here in the very beginning goes a long way. Guiding the player though a round or two really helps make the player feel informed and comfortable. Tigris and Euphrates did a fantastic job at this. Poor English and misspelled words don’t help much, either.

I ended up reading a few tutorials online for the boardgame, and then took that knowledge back into the app, and it helped make everything clearer. It’s not so bad once you dig into it a bit, but it just feels daunting at first. Didn’t help my track record mind you, I have yet to win a game of Yggdrasil yet. If you’re looking for a game to stroke your ego I’d probably look elsewhere.

Not to say that it isn’t fun, because it really is. Since the victory isn’t in any way a “gimmie” I likened it to playing the underdog, or charging headlong up a mountain to battle. All odds against you, yet you stand and fight anyway. It’s actually quite fun, but requires a lot on the part of the player to learn the game. Yggdrasil would benefit greatly from a well-done tutorial.