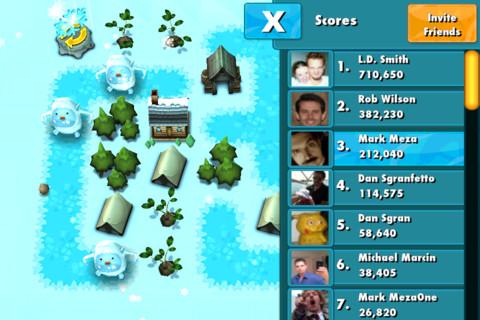 There’s a certain wisdom in music that, if you’re going to cover a song, you really add to do something new. You need to make it your own. Otherwise, why would someone listen to your song instead of the original? The same goes for games. Unfortunately for Yeti Town, the only substantial difference between it and Facebook’s Triple Town is the platform it’s on. Otherwise it’s the exact same game, only this time with snow.

If you haven’t played Triple Town yet (and you should; we didn’t name it our Facebook game of the year for nothing) it’s essentially a very clever twist on match-3. You still need to match three or more of the same piece on the board, but instead of simply clearing them away to earn a high score you’re actually building a town. Match three grass and you have a bush. Match three of those bushes and you have a tree, which in turn becomes a cozy little cottage, and so on. Throw in some pesky bears to make life difficult, and you have an incredibly unique, and impossibly fun experience.

While Yeti Town will have you matching different pieces, the results are the same. Three plants turn into a tree. Trees turn into tents, which turn into cottages, and so on. Instead of bears there are yetis, and instead of ninja bears there are walrus’. Yeti Town doesn’t offer any new twists or tweaks to the gameplay to excite Triple Town players. The only slight difference gameplay wise is that Yeti Town really likes to dole out the yetis. At times our screens were practically full of them.

Of course, since Triple Town is an excellent game, this means that Yeti Town is itself quite fun. But that’s only because it’s exactly the same. Aside from the visual change, which is pleasantly charming but not particularly striking, the only real benefit to the game is the fact that you can play it on the go as opposed being restricted to Facebook. Of course, from what we’ve been told, a mobile version of Triple Town is in the works anyways. 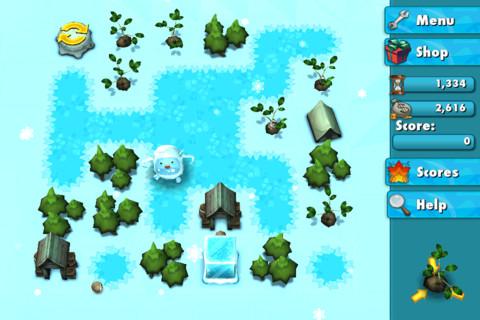 There’s really not much else to say about Yeti Town since it so closely resembles Triple Town. If you’ve always wanted a mobile version of the game, Yeti Town serves as a nice way to keep yourself occupied while you wait for the real thing to come to your device of choice. Just don’t expect to see anything new. As far as these games are concerned, there really isn’t a difference between a yeti and a bear.