Yet Another Zombie Defense Review 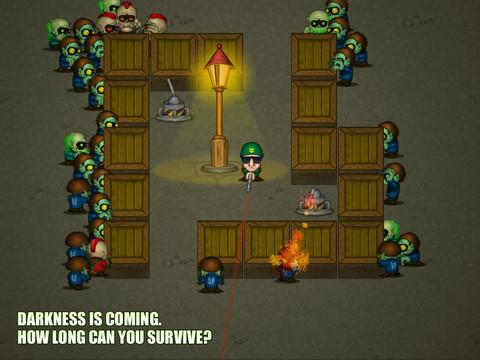 The name says it all.

Yet Another Zombie Defense, an iOS version of a three-year-old Xbox 360 game, promises a mix of dual-stick shooter action with tower defense strategy in a one-man war against the ravenous undead. It doesn’t quite live up to that billing, however, and while it does what it does pretty well, what it doesn’t do is enough to keep it from making a serious claim to the kingship.

The game plays out over two stages. The tower defense portion occurs during the day, when you load up with guns and ammunition and build fortifications against the zombie onslaught. At night, the arcade action kicks in as you battle to fend off that onslaught. It’s not necessarily the most original idea anymore but it’s still a good one, and the action is fast and furious.

The presentation is nice, too. The iOS version of Yet Another Zombie Defense is visually very different from its Xbox predecessor but the graphics, while spartan, are clean and sharp, and the music is excellent. You play as an unnamed soldier who, at least to my eye, bears an uncanny resemblance to a Sgt. Slaughter bobblehead doll, and your job is to defend a single, solitary lamppost from the risen dead. Your range of movement is limited to the cone of light cast by the lamp, which delineates the boundaries of an otherwise entirely featureless arena.

The control scheme emulates the thumbsticks of a conventional game controller with a pair of virtual sticks in the bottom corners of the screen, one to move and the other to shoot, letting you pump lead into enemies while simultaneously running in the opposite direction – never a bad strategy for a zombie holocaust. It’s a simple-but-effective setup, and while it’s not ideally suited for precision aiming, the lack of accuracy never proves to be a problem that can’t be solved through the judicious application of “more bullets.”

Zombies come in a variety of flavors – some fast, some tough, some who pop like explosive zits when they die – but fortunately so do your weapons. You begin the game with a pistol, which has the advantage of unlimited ammo and nothing else to recommend it, and as the game progresses you can arm up with Uzis, shotguns, machine guns, flamethrowers, sniper rifles, rocket launchers and even fanciful Tesla cannons and laser guns as your financial situation allows.

The weapon selection is decent, but the fortification side of the game – the purported tower defense – is an absolute snore. Only two types of fortifications are available, barricades of wood or steel, and while you can in theory lay them out in any pattern you like, their uniformly square shape and high cost relative to the money you earn per level make it impractical to build much more than a small rectangle with a single opening allowing you to dash out and grab the money, ammunition and health that fallen zombies occasionally drop.

The only other building component in the game is the turret, which must be combined with a weapon in order to function. Turrets as hideously expensive as well, but they do rack up the body count at a very swift clip; the downside to that is that they also eat ammo like it’s candy and if they happen to run dry in the middle of a level, there’s nothing you can do about it except watch the zombie hordes quickly reduce them to very expensive rubble.

If your defenses are breached and suffer any kind of significant damage, it’s very likely game over even if you survive to the end of the round. Zombies get progressively tougher, faster and more numerous with each passing round, and while it’s possible to survive the first few rounds with just a gun and good thumbs, it doesn’t take too long before a turret and something to hide behind are a bare minimum for survival. Unless you have a very large reservoir of cash built up (which is unlikely, given the economics of the game) the loss of turrets will almost certainly, and very quickly, prove catastrophic. 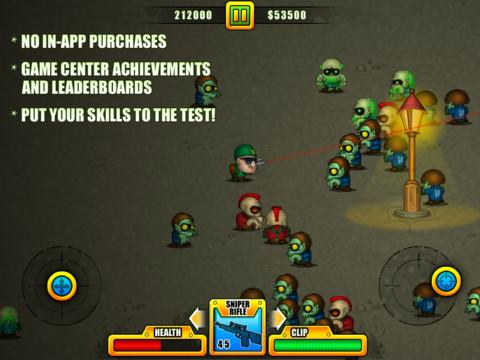 And when you do die, instead of being given the option to restart the level, you’re shipped right back to the very beginning, with nothing to show for your effort but the lowly pistol in your hand. This is the game’s biggest failing, and it’s big enough to really put a dent in it. It’s not like you’re building Helm’s Deep here, but watching your hard-won defenses go up in a puff of smoke because your turrets ran dry or your thumb slipped off the stick at the wrong time is beyond frustrating, and few things discourage interest quicker than being pushed to the bottom of the ladder for the slightest misstep.

Perhaps my expectations for Yet Another Zombie Defense were off-base. I was looking forward to a sharp mix of light tower defense strategy and arcade action, but what I got was a competent but unremarkable dual-stick shooter with sentry turrets and blocks- reasonably fun, but quickly forgettable.