Excellent production values. Great story. Some very nice gameplay innovations that go a long way toward eliminating some of the major annoyances of adventuring.

Clunky and sometimes cheesy dialog. Most definitely NOT for kids.

Yesterday is a dark, puzzling, and innovative adventure game that no fan of the genre should miss

Yesterday is a heck of a ride. It’s got a little sex, a lot of violence, a few laughs and some salty language, all wrapped up in a dark, twisted tale of betrayal, torture, murder and the never-ending battle between good and evil. Don’t let the cartoonish graphics fool you – this is an excellent game, but it’s very much for adults only.

John Yesterday is a man without a past, left an amnesiac as a result of a suicide attempt made while investigating the kidnapping, torture and murder of homeless people in New York City. Now physically recovered but unable to remember a thing about his life or even what drove him to try to end it, he returns to the case, still hoping to halt the killings – and more importantly, to piece together his past and regain his memories.

Yesterday starts off innocently enough – once you’re past the shocking, horrific intro cinematic, that is – but very quickly takes a turn for the weird. Then things get dark. Then things gets really weird and really dark. And then the wheels come off completely, and no matter how closely you were paying attention you will have absolutely no idea what just happened or what’s going on – but all in a very good way – and I can just about guarantee that by the time you hit that point, you’ll be baffled, flabbergasted, gobsmacked, and completely hooked.

At its core, Yesterday is a fairly conventional point-and-click adventure, albeit a very well-polished one. The quality of the production is top-notch, with an incongruously pleasant and attractive visual style that belies the malevolence of the game underneath, and does a fantastic job of conveying a powerful sense of loss, menace and dangerous psychosis in its many characters. The music is sparse but subtle and creeping, a perfect match for the setting, and the game is fully voice-acted by a cast that clearly takes the job of bringing the story to life seriously, yet manages to avoid falling over into camp.

Yesterday brings some great mechanical innovations to the genre as well, perhaps most notably the way it moves your character immediately from one area of a room to another when interacting with objects rather than making you wait while he slowly saunters over. It’s a perfectly elegant solution to one of the most irritating yet enduring “features” of adventures – waiting for walking – and one I would very much like to see other games pick up on. 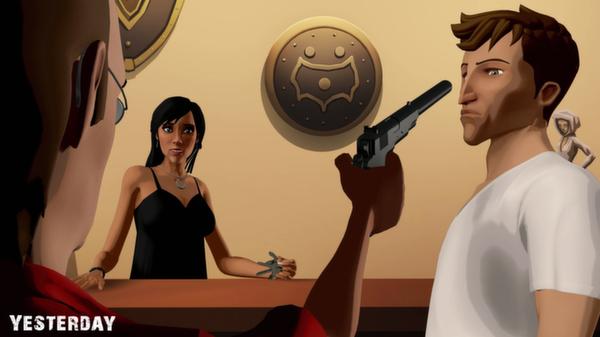 Another welcome feature is the built-in hint function, which just about guarantees an end to the frustrated hair-pulling that’s inherent in so many adventure games. Sometimes it will simply tell you what to do, but more often it offers just a push in the right direction; I’m not ashamed to say that I made extensive use of it, and I enjoyed the game substantially more as a result.

On a less positive note, the interface is a little idiosyncratic; it’s simple and functional but never really smooth or transparent, and some actions, like combining inventory items or picking up multiple objects from a single location, are more trouble than they should be. Finding the room exit hotspots without resorting to the “hotspot locator” function, which at times feels almost a little too helpful, can also be a bit tricky.

The dialog can be a little rough around the edges as well. Interactions with NPCs are almost entirely straight-up expository Q&A sessions, while the cut-scene conversations, particularly the pillow-talk bits [that’s right, there’s post-coital chit-chat to look forward to], have a clunky, almost Lucas-like cheesiness to them. And because the plot is so convoluted and things happen so quickly, it can be hard to keep up with what exactly is going on, even after the answers start to come out. 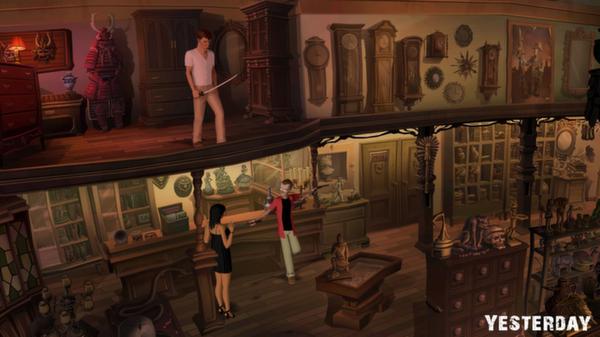 But the fun is in the mystery, and this mystery is a good one. Yesterday is a bold effort, not just in the story it tells but also the way it’s told, with numerous brief, animated interludes and several flashback sequences that slowly come together to help everything make sense. I expect that most gamers will be kept guessing almost to the very end, and the end, when it comes, is very satisfying indeed. It’s a gruesome, macabre tale, with a heft and seriousness that isn’t often associated with the point-and-click adventure genre. Like a Stephen King novel, it may not be great literature, but it’s an awfully good story.

And also like a Stephen King novel [or at least the good ones], it’s definitely not for kids. It’s a point worth emphasizing, because a quick overview of the game and a glance at some screenshots probably won’t convey what actually lies within. Yesterday boasts a smattering of f-bombs and, more importantly, scenes of murder, torture and other unpleasantness. In fact, anyone with an aversion to violence or the occult will probably want to stay away.

But adventure fans who enjoy a good murder mystery/horror story will absolutely love it. With all the polish of a major, mainstream release, some excellent gameplay innovations and a graphic, disturbing story that pulls no punches, Yesterday is not a game to be missed.