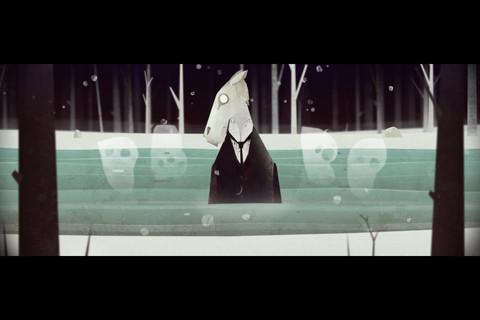 The woods are lovely, dark and deep.

The crunch. Days after finishing Year Walk, it’s the persistent, echoing crunch of snow that has stuck with me. It doesn’t help that I live in perpetually blustery Ottawa, Ontario, where a boot print full of powder is never more than a couple steps outside your door during February. Now, however, I half expect the world to drop away between one stride and the next, the pedestrian-packed streets replaced with a harrowing wood filled with mystical creatures. A minute detail that has – much like the game it came from – wormed its way inside my brain and left a small, indelible mark. Like a footprint in the snow.

To describe Simogo‘s latest in too much detail would be a disservice to the experience. And while that’s a word that gets bandied about pretty freely as a casual replacement for “game,” that’s very much what the two man team has crafted here. With obvious inspiration from the point-and-click adventure genre, Year Walk  sets players on a first person journey through the Swedish wilderness as part of a titular vision quest: a many hundreds year-old practice used to escape the physical realm and tamper with the past and future. Along the way, the game delivers puzzles and lore that reveal the morbid secrets of the character making the journey.

As an adventure game, Year Walk captures much of the same lightning that made Myst such a phenomenon, walking the razor’s edge of structure and ambiguity with confidence. Simogo bets big on the idea that their meticulously crafted world is so worth exploring that they don’t need to provide any direction; not a single instruction detailing how to interact, and nothing resembling a hint in sight. And almost always, they’re proven right. From the moment the introductory story scrolls down the screen to the game’s shockingly blunt ending, Year Walk oscillates effortlessly between a sense of maddening confusion and spectacular detail.

What begins as aimless swiping from side to side in an effort to catalog the game’s expansive forest soon leads to the first major discovery – a windmill, where a young woman stands waiting. Her dialogue spurs you to traipse your way back to your starting cabin, where a goal becomes clear in your out of body state: find a mysterious key that unlocks a gate which waits patiently at the end of the wood. And suddenly, the game is afoot. Or is it? You can hardly remember your way back to the windmill – if that’s even where you’re supposed to go, and everything looks the same. Except…perhaps not. Certain trees have mysterious animal symbols on them followed by indications of a peculiar…is it a language? Hastily, you fish for some scraps upon which to write things down – in real life, not the game. And by now, it’s too late. Year Walk has you completely.

Even when the next goal is shrouded in mystery and you find yourself walking in circles, Simogo proves they know exactly when and where to drop new breadcrumbs, and how to craft narrative through puzzling. It’s hard to stay frustrated when you finally discover a sense of direction, and that direction is decoding a treasure trove of foreign symbols. Acting as supporting fabric for the game’s calculated madness is a soundtrack that is all at once chilling and soothing, filled with the kind of melodious twinkling that emits from a haunted music box. It pairs perfectly with the bold visuals, assembled like a mixed media collage from papercraft and CGI. Year Walk is a cerebral curator of curiosity, expertly snowballing broad fascination with what you can see and touch into insatiable puzzle-solving hunger. 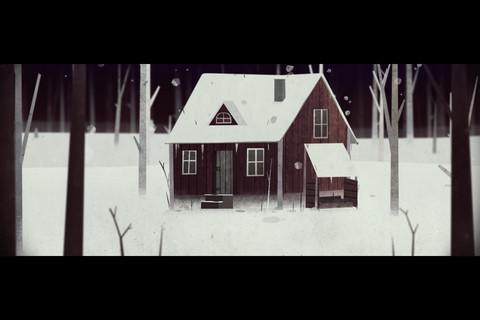 Easily the crowning jewel, though, is the way that form mirrors function in this evocative outing. Just as a year walk is about the mixing of physical and metaphysical worlds, Year Walk itself audaciously demands that players work outside the confines of the game to get the most out of the experience. Mysterious animalistic figures are explained and detailed in Simogo’s pseudo historical mini encyclopedia, the Year Walk Companion, where detailed descriptions of their history and purpose give subtle by illuminary hints that help players forge a path forward. Switching between one app and the other does wonders to transport you into the mindset of an explorer in a mysterious woodland.

Blowing the doors of the game wide open, however, is a mysterious moment that occurs just as the last shots are fading, which hint at the potential for future updates that could keep players exploring digital resources far into the future. Fittingly, I’ll leave you to mine these depths for yourself! Simogo has packed Year Walk with a hefty share of spine-tingling jump scares, but it’s these external trappings that cause the game’s lore to get under your skin and stick with you long after your phone or tablet has been turned off.

Speaking to Simogo co-founder Simon as I finished playing the game’s secret ending, I asked him if there was any more I had missed. Replying coyly in a quick e-mail message, he said:

“You’ve seen everything. Now you just have to think.”