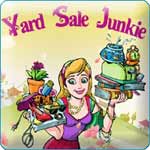 A garage or yard sale gives owners a great way to get rid of perfectly good junk. A neighbor recently held a garage sale and my kids couldn’t help but buy some of the cheap goods – after all, one person’s junk is another person’s treasure. However, when it comes to my kids’ purchased treasures, I see them as junk cluttering my house. The same could be said of Yard Sale Junkie.

Shirley wants to open a boutique in Beverly Hills, so she hold yard sales to earn over $30,000 to open a store. It’s hard to believe that 30 yard sales could rack up that much, but nevertheless it takes 30 levels of finding hidden objects to reach the final yard sale.

Like a typical yard sale, objects appear all over the scene and overlap each other. Some blend well into the background for tricky finds. Unlike most hidden object games, players need to move junk around to find items that hide behind others.

Customers appear in boxes along with the item they want, the price they will pay, and their happiness meter. Once in a while, you’ll have two or even three people clamoring for the same item. You can take advantage of this to sell the item to the highest bidder. However, in the frenzy you might not realize you have people wanting the same thing or accidentally sell the item to the wrong person because of the way the interface is set up.

Getting into the game proves challenging right away because of the blurry and blocky graphics. Also, when customers’ patience almost runs out, their boxes start blinking. This made me jumpy and annoys because it messes with the already poor quality interface.

Shirley travels around Los Angeles to places including Santa Monica, Hollywood, and Venus Beach, but passing through another place is disappointing as you wouldn’t know it unless you look at the map. Most of the time, the sales take place on a person’s lawn. Once in a while, the sale occurs at the beach or near the shore. If the places could play a bigger role, it might give the game a lift.

The behavior of moved objects isn’t consistent. Sometimes they stay wherever you move them and others they bounce back where they were before you moved them. Intentional or not, it is irritating when an object comes flying back to where it was before you picked it up.

Sometimes Shirley holds themed sales where she sells only kind of item ranging from colorful Mylar balloons and CDs to watches and jewelry. The Mylar balloons float up and down to create more obstacles to finding the right balloon.

Watches, jewelry, and pins sit on a black board that players zoom in to find the right pieces for the customers. This creative feature also causes problems. Sometimes the game unexpectedly zooms in. Later levels contain multiple boards and scenes that you can move from one to another. While a novel idea, its execution needs work.

Though the game has a timer on every level, it doesn’t compel players to push themselves. The game needs something to motivate players into wanting to do well. Maybe reward players for beating a set time or amount of profit earned. Those who love to beat their old scores can replay a level to do just that.

The game provides a plentiful 10 hints per level. Even when I tire of the game, I never come close to using 10. When using hint, the game flashes the locations of the items current customers want. Because of the not so stellar graphics and mad dash to find stuff, it’s not always possible to catch the hint.

Also needing improvement is the naming of the objects. A customer wants a "ball," so I hand her the baseball. Nope, it doesn’t qualify. It has to be "baseball." Another customer wants "floral," so I retrieve a plant with flowers. Wrong, again! The game thinks floral only applies to floral-type décor. These types of naming issues fly all over the game.

With only 30 levels, the game doesn’t last long by hidden object game standards. By the way, it loves purses and sunglasses as those frequently appear. For items like shoes, earrings, and rollerblades, players must find the item’s exact match and put them together before making the sale. The audio neither excites nor disappoints. It works.

Though Yard Sale Junkie brings new twists to the hidden object game genre, the graphics and usability issues tarnish the game. Already, plans are in motion to release a sequel. Let’s hope the developer works on the needed improvements to help the game realize its full potential.