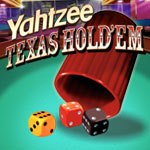 When you have a hot property, you want to utilize it in every way possible. The makers of cranberry juice, for example, didn’t stop at selling a generic fruit drink; they branched out into cranapple, crangrape and so on. Over the years, Hasbro has done the same thing with its Yahtzee property, with uneven results. (Battle Yahtzee, anyone?) Now we have Yahtzee Texas Hold’em, an odd pairing that, like a glass of cranmango juice, might be a little hard for some players to swallow.

Hasbro was smart to put “Yahtzee” first in the title because it’ll set casual gamers at ease. Who among us doesn’t enjoy turning off our brains and letting the dice roll? Texas Hold’em, however, is a horse of a different color.

In the popular variation of poker, players make a “forced bet” before the cards are dealt. After this is done, each player is dealt two cards. Once the players have looked at what they have in their hand, they must decide if they want to call the current bet, which means to match it, fold their hand without betting because they don’t like their cards or raise the bet by putting more money on the table. The round of betting stops when all of the players have either folded or called the last raise.

The recipe for Yahtzee Texas Hold’em calls for a dash of Yahtzee and a heaping cup of Texas Hold’em. In fact, the only reason Hasbro can get away with applying the Yahtzee brand to this game is because it replaces the standard 52-card deck of playing cards used in Texas Hold’em with colored dice. The face of the dice serve as the rank, while the colors act as the suit. In addition, there are nine winning hands, ranging from a Yahtzee Flush (five dice of the same number and color) down to Two Pairs (two dice of the same number and two dice of another number). If you’re not well-versed on poker hand rankings, you can access a help screen in Yahtzee Texas Hold’em explaining each of the winning hands.

From there, the rules of Texas Hold’em are well simulated in two separate game modes: Tournament Play and Quick Game. In Tournament Play, you travel a long and twisting road from Basement Friendly Game Night to the Ultimate Championship, with each match taking place at one of 20 regular locations or five secret locations. You also encounter four different criteria for winning, depending on the location: 1) being the first to win three, four or five hands; 2) having the most chips after five, six or seven hands; 3) making everybody run out of chips; and 4) winning a short stack, in which you start with fewer chips than everyone else but still make your opponents run out of chips first. In Quick Game, you set your own conditions for winning as well as the number of your opponents and their skill level.

The easy mode in Quick Game gives casual players who want to learn the basics a place to start. At that level, it’s not hard to scare away challengers by betting high, and you can try different strategies as you increase your skills. You’re going to need them, too, to have a shot at beating the Tournament Play mode. Even Amateur Circle and Casual League games, which are just a few stops down the road to the Ultimate Championship, can seem like the Texas Hold’em equivalent of Deep Blue.

As a matter of fact, every aspect of Yahtzee Texas Hold’em is as solid as the artificial intelligence. The interface is clean and simple to use, the visuals are attractive and varied and there’s plenty of reading material to bring newbies up to speed. Plus, if you buy into the idea of playing Texas Hold’em with dice, you’ll find the gameplay as dramatic as the real thing. Add in the ability to create your own avatar, get advice from the computer during gameplay and earn 20 different trophies, and you have a well-rounded program in which the only feature you might miss is online play.

I do, however, have one question. Who is Hasbro targeting with Yahtzee Texas Hold’em? On one hand, the complexities of Texas Hold’em might put off casual gamers who download the software because of its Yahtzee tie-in, while on the other hand, the use of dice might bewilder fans of Texas Hold’em. Did Hasbro miss the mark in its eagerness to combine two popular pastimes? In the least, the game is a creative stretch, albeit one that’s well-executed.