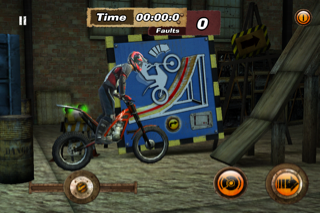 Back in 2008, my PC gaming buddies and I were obsessed with a little motocross physics title called Trials 2. The game seemed to channel the spirit of Nintendo’s classic ExciteBike while simultaneously challenging players to a fresh new physics-heavy experience. Since that time, a plethora of titles have tried to copy the game’s formula. Some of them turn out to be great releases like Joe Danger and Mad Skills Motocross. Some of them don’t. Xtreme Wheels falls firmly into this latter category.

The idea behind Xtreme Wheels (as well as many of the games we just mentioned) is that player’s control a rider atop a dirt bike. That rider seems to be something of a daredevil, as he wants you to guide him over ramps, past hazards, and through loops as he makes his way from one end of an obstacle course to the other.

To do this, players will control the bike’s gas and brake, as well as the rider’s ability to lean forwards and backwards. Bike controls are simple buttons, while the rider’s tilt is controlled by an on-screen slider. Players will also have the option to control it through on-screen buttons or tilt controls, but none of the options are particularly as responsive as you’d like them to be. It’s not that they’re unresponsive per se, but it just doesn’t feel like your biker is also following your commands as quickly as you input them.

The game offers only 20 courses, although this will probably be enough to keep you busy for some time thanks to their blisteringly difficult design. Like any good game, the first few levels ease you in quite nicely. Pretty soon though, you’ll encounter some segments that require you to ride backwards down ramps and safely land jumps – and these will make you want to throw your iPhone through the window. Due to the responsiveness issues mentioned above, it can take 30+ tries for you to land one of these successfully. There’s a big difference between “challenging” and “ridiculous,” and it’s pretty clear which side of the fence Xtreme Wheels falls on.

If you judge by the screenshots alone, Xtreme Wheels might look like a visual tour de force. However the screenshots on the game’s iTunes page are pretty misleading, as they aren’t in any way indicative of what the game looks like in action. 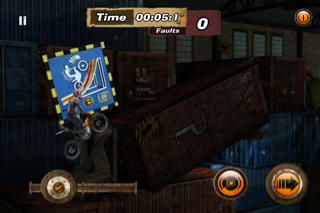 Once you get used to what the game actually looks like, the occasional frame rate stutter really hurts the overall visuals, and worse yet, can make it even more difficult to properly execute jumps and landings. Beyond that though, the look of the game is just completely uninspired. More to the point – it’s completely “inspired” by Trials 2. Put the two releases side by side, and I’d challenge you to tell me which one is which.

And that’s Xtreme Wheels greatest flaw. In a genre that’s full of titles that have used Trials 2 as a source of inspiration to build off of, Xtreme Wheels ends up playing more like a “me too!” title than a truly unique game. Couple that with lacking control and some frustrating course design, and you’ve got a motocross experience that never really manages to land on two wheels.