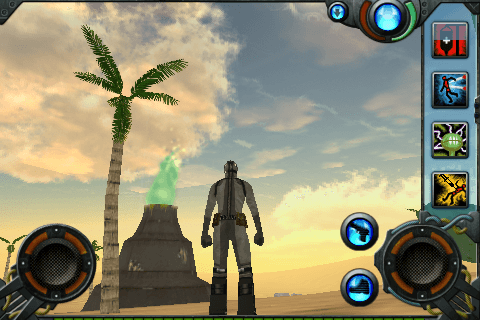 Sure, it’s a tiny apocalypse, but it’s pretty epic, too.

Ah, good. You’re awake. You’ve been asleep for a while. Too long, in fact. I hate to break it to you, but the world’s changed, and not for the better. Here, take my gun, it’ll at least buy you a few minutes against the giant scorpions once you get outside. I don’t expect you to know who I am, but you need to start remembering who you are. We need you, sir, and we need you to help us solve the mystery of Xenome Episode 1.

Xenome Episode 1 is a fully 3D RPG for the iPhone, set in a post-apocalyptic desert – known as “Silica Flats” – covered in deadly radiation. The game starts with a character known only as “The Scientist” being woken up from a 250 year-long cryostasis nap. Outfitted to survive the surrounding wasteland, it’s up to players to figure out The Scientist’s back story, which will explain what happened to the world and why rival corporations are trying to murder him.

Gameplay is handled via two thumbsticks that appear at the bottom of the screen, one handling movement and the other controlling the camera angle. Other buttons on the screen handle attacks, jumps, and special abilities. A drop down menu on the top of the screen provides access to things like inventory management, the world map, and the objectives of one’s current quest.

The story is advanced via lengthy text screens whenever you talk to someone (which is only possible when someone isn’t trying to kill you). The game’s plot is pretty substantial, and will take about a dozen hours or so to complete. These quests are sometimes a bit on the dull side, requiring you to go out and kill certain numbers of specific enemies or just grab items for other characters.

Thankfully, combat is actually pretty fun. The scientist is armed with both a melee and ranged weapon, which he’ll automatically switch between depending on his distance from an enemy. Once a battle starts the game itself will handle actual attacks, while players are left to manage special abilities (which makes the game much easier to handle).

While open-world gameplay has been included in other iPhone titles, none have managed to pull it off on the same scale of Xenome. The game contains about five square miles of desert for gamers to roam around, pursuing lost artifacts of the past and dealing death to mutants, monsters, and gun-toting maniacs haunting the area. The sense of freedom the game provides is astonishing to say the least. 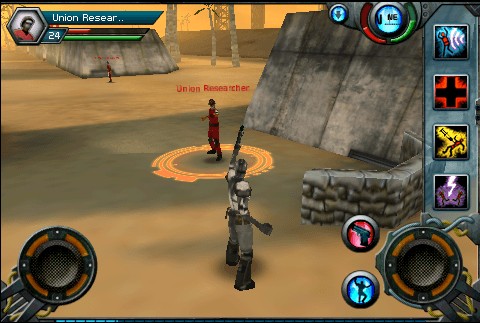 The game’s graphics are both an incredible strength for the game and, at times, its weakest point. On one hand, desert looks great when you pan the camera around. The Scientist looks pretty good, and his in-game appearance will change in the game based on what players equip him with. The clouds, the blowing sand, the broken-down architecture, and the way things fade into the distance, all of these elements look fantastic. Characters (and creatures), however, lack detail and move awkwardly. Also, the frame rate slows down to a crawl during particularly hectic sequences.

Xenome Episode 1 is a great post-apocalyptic RPG for the iPhone. Actually, it’s just a great game, period. Nine Pound Studios has not only created an excellent adventure with an engaging storyline, but it’s also managed to take gaming on the platform an immense step further than anyone else has been able to. The developer has stated that this is the first part of a much larger series; hopefully we’ll get to see The Scientist’s adventures continue in the future.