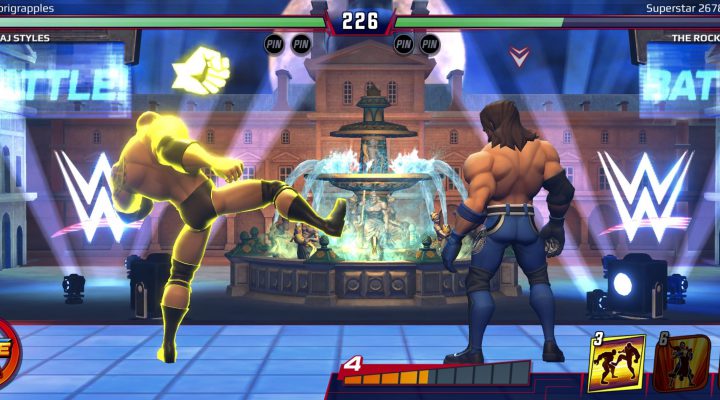 A great mix of concepts

Good balance of speed and tactics

Waiting for boxes to unlock will always be annoying

WWE Undefeated (download from the App Store and Google Play Store) is two games in one. It’s a deck building CCG, that sees you collecting and empowering cards. And it’s also a surprisingly brilliant one-on-one brawler. And it’s by far the best combination of those two genres we’ve seen in a long while.

The aim of the game is to pummel and toss your opponent around until their health bar hits zero. Twice. To do that you’ve got a deck of cards that represent your moves. These cost energy to spend, energy that recharges as you use it.

Different moves have different costs. There are smacks and slaps, kicks and punches and more complex grapples and throws. You’ve got counter moves as well, which let you deflect an opponent’s attack.

You can also move your fighter around the not-really-a-ring. Swiping on the screen dodges them in that direction, letting you get some distance from your foe or close in for the kill.

Scraps are tactical, but still cling onto the fast-paced thrash of more traditional beat-’em-ups. Dodging an attack and then landing your own will get your blood pumping, and there’s a tension to every bout that’s brilliantly balanced.

The best thing about WWE Undefeated is that you constantly feel like you’re in control of the outcome of a fight. You’re not just spamming attacks, you’re thinking tactically, and the joy when a hefty punch connects with a cartoon-style jaw is spot on.

WWE Undefeated is a brilliant mix of genres, dripping with the pantomime glitz of professional wrestling, and packed to the rafters with tiny tactical decisions. It is, in short, really rather good. And you should definitely give it a go.