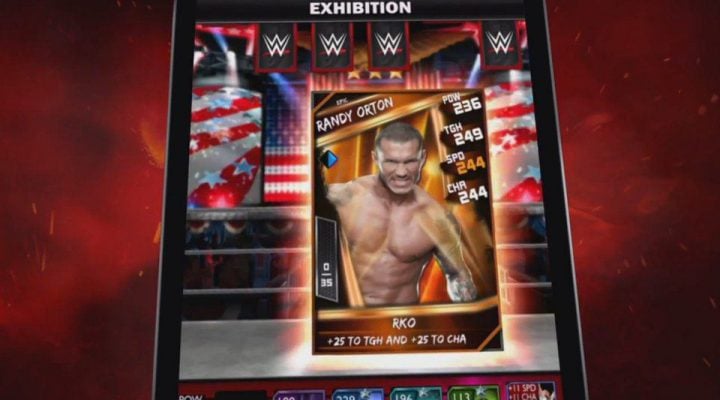 Features a huge roster of WWE stars past and present

No energy or stamina system

Characters' stats often don't match up with their skills and personality

King of the Ring mode is uninteresting

You can’t be blamed for approaching WWE SuperCard warily. It’s a card-battling game about a major corporation that’s published by another major corporation (2K Games). Moreover, it’s free. If you’re savvy to how big-name free-to-play games tend to work, you’re likely going to spend the first hour or so cringing, waiting for the game to bring a paywall down on your head like a metal chair.

Fear not, though. WWE SuperCard is simple to learn, fun to play, and very fair about in-app purchases. Tell ’em, Hawk! 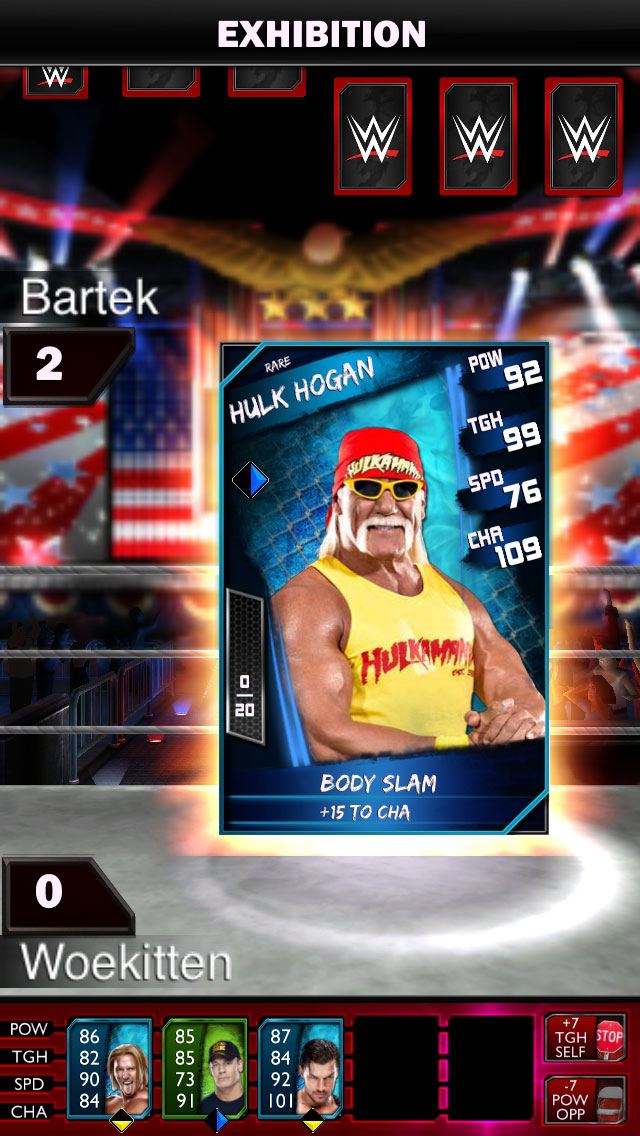 The real meat of the game is Exhibition. You start with some random superstar cards of varying rarity. Each wrestler has several stats: Power, Toughness, Charisma, and Speed.

When a match begins, you need to select a wrestler (or wrestlers, in the case of a tag-team match) based on certain criteria. For instance, a match’s outcome might be based on your wrestlers’ speed and charisma. Higher numbers win, though there are effect cards like chairs and stop signs that can boost your own wrestlers’ stats, or lower your opponents’ numbers just enough to give you an edge in the ring. 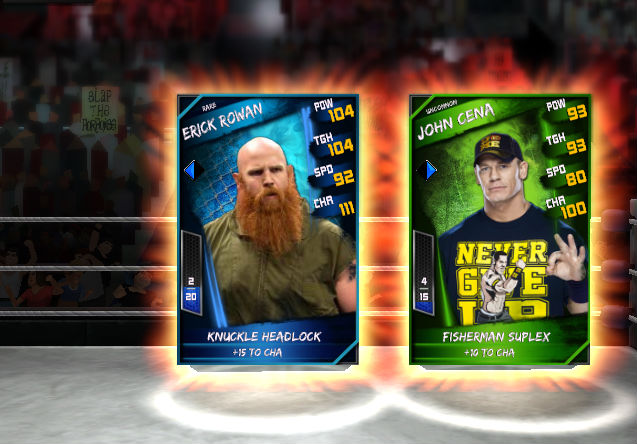 Though it sounds a tad complicated, WWE SuperCard is anything but. It’s simply a game of numbers that’s easy to latch onto after a couple of practice rounds. Matches, which are best out of three, fly by quickly. It’s also pretty hilarious to watch cards strut down the gangplank and drop-kick rival cards.

Best of all, there’s no energy or stamina bars to contend with. You can play WWE Supercard for as long as you want without having to wait on refills. While you can buy different quantities of the game’s hard currency, “credits,” in-app purchases are mostly present for people that want to score ultra-rare and legendary cards.

You shouldn’t have a problem building up a nice stable from what the game gives you for free, however. The roster dates back for years, giving you a nice variety of superstars from the past and the present. And, like most card-battling games, you can use your lowly common cards to build up your champions. This is called “training,” but if you’re a veteran of the genre, it’s hard to get over the fact you may actually be feeding Yokozuna to Triple H.

WWE SuperCard does have one weird flaw: The superstars’ stats don’t really match up with their character. My deck has Erick Rowan, that cult weirdo that wears a sheep mask and quietly follows Bray Wyatt like a bushy-bearded dog. His Charisma stat is far higher than AJ Lee’s, who is – well, she’s AJ.

It’s a minor thing, though. WWE SuperCard is a very decent card-battling game that’s more concerned about engaging players than bleeding them dry with in-app purchases. It’ll steal your heart, then monologue about it for ten minutes in the middle of the squared circle.