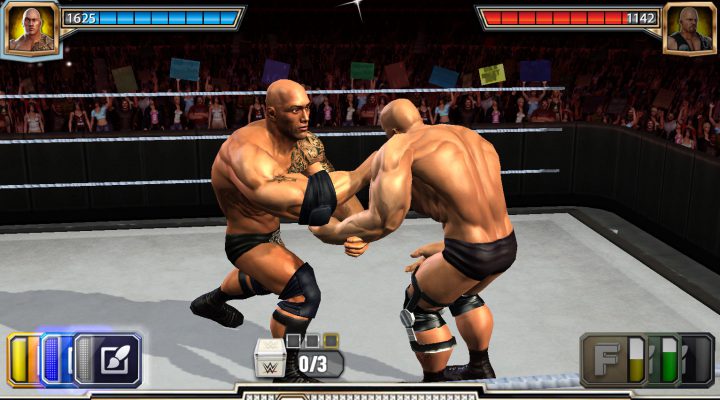 Outstanding art and animation add to the fun of its match-3 bouts.

Has a wide variety of game modes.

Doesn't break any new ground in the match-3 RPG genre.

Advancement is complicated if you haven't played similar games.

Let’s face it: we’ve all been there, done that with match-3 games. Even match-3 titles with a heavy RPG component are getting to be old hat by now. Yet they’ve proven so popular that any niche that hasn’t already been filled is ripe for something to do just that, which is how we have WWE: Champions by Scopely.

On one hand, Champions is exactly what you’d expect. On a playing field full of different colored jewels, you need to make matches of like colors for your WWE Superstar to execute moves and damage the opposing wrestler. Three jewels will do a normal move, four will take out a whole row and deliver additional damage, and five creates a wild card jewel that can be used in any match and gives you an additional turn. 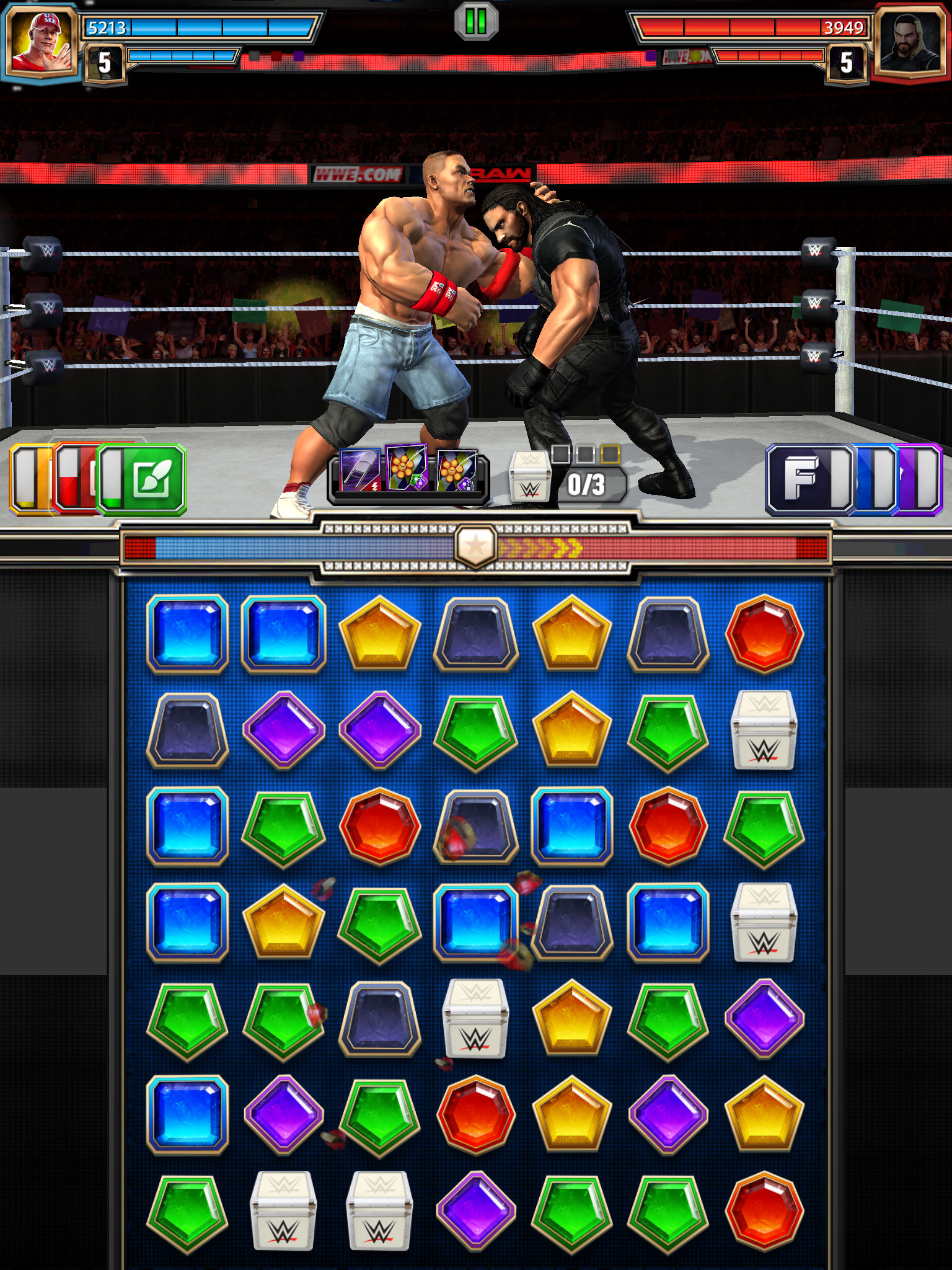 Every wrestler has three signature moves with meters that fill when the correct color match is made. Pulling one off does a good deal of damage, affects the board in some way and often grants you an extra turn. The finisher also pins the opponent, though he can kick out by making matches of a certain value unless his health is completely depleted. There’s also a gauge that swings back and forth with momentum changes in the bout, allowing for additional pinfall opportunities if you play your cards … er, jewels, just right.

What makes WWE: Champions more compelling than other games that have followed a similar blueprint is the way its developers have given it some visual oomph as well. Not only are a wide selection of grapplers both present and past (though no female wrestlers, at least for now) represented in a larger than life, comic book-type art style, they really perform the moves you’re setting up for them. On top of that, there’s an appropriately energetic soundtrack that includes the theme songs for both Raw and Smackdown.

So what’s not to like? Maybe the advancement and leveling mechanics, which are similar to the ones used by games like Marvel Puzzle Quest but may be confusing to genre newcomers. Just spending the game’s regular currency makes your wrestlers more powerful, but only until you reach a certain threshold, at which point you need to find certain items as well. The level of your signature moves also creates a ceiling on advancement until you level them up, which can be done with Training Points or posters of that wrestler. A variety of rewards can be won or purchased, but the entire system is a bit overwhelming and complicated.

On the plus side, there are multiple game modes in which to hunt down advancement items, tokens to unlock more Superstars and other goodies. The main focus, especially early on, is ‘The Road,’ which sees you battle your way up from NXT to the big time, encountering a ton of different opponents on the way. Daily and other limited time events are also options, as are events based on whatever is happening in the real life WWE. At player level 5, you unlock the Versus mode to put your skills to the test against other players, and you can join a Faction even earlier to get yourself some teammates. 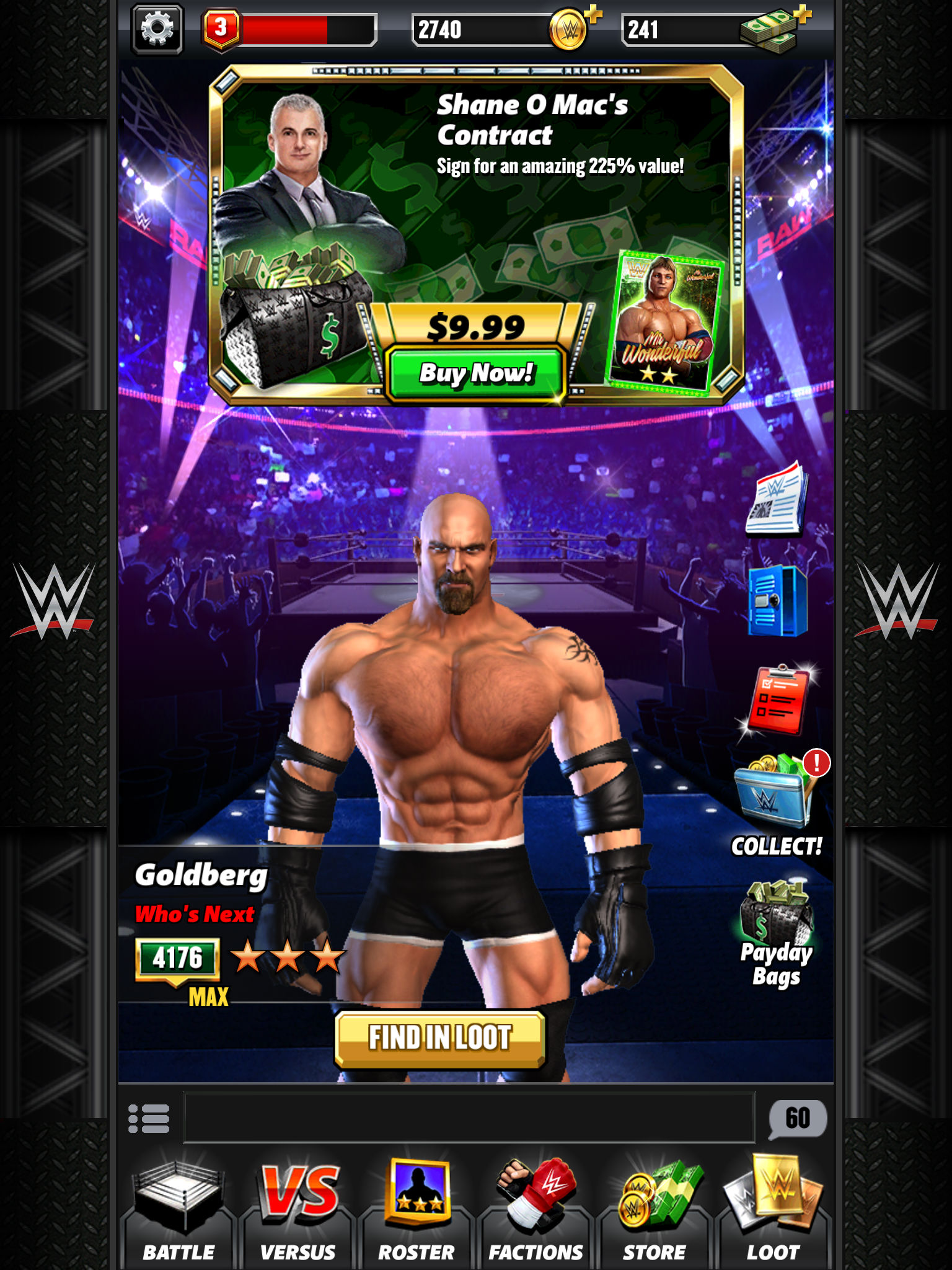 In other words, Scopely has covered pretty much all the expected bases with WWE: Champions, and there’s little doubt that fans of sports entertainment are going to be hooked as soon as they launch it for the first time and have The Rock guiding them through a tutorial match against Stone Cold Steve Austin.  Non-fans might need a little more convincing, but this is a well-done game even if it’s treading on a much-traveled path, one that’s hard to put down after you’ve earned a few pinfalls.