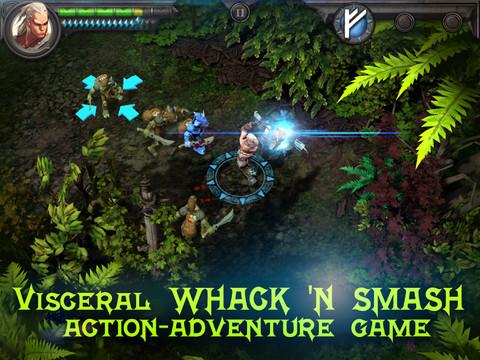 It may be a simple concept, but beating up monsters is a whole lot of fun.

The annoying thing about magical post-apocalyptic settings is that the fate of all that’s left of civilization rests solely on your shoulders. No sidekicks, no reinforcements, and in the case of Wraithborne, the latest iOS hack-n-slash game from Cresent Moon Games and Alpha Dog Games, not even a name. That’s just the way it goes, so there’s no use pouting about it. Pick up your hammer and get to smashing!

With the Age of Humanity somewhere in the rear-view mirror, magic has returned to the world. Along with it has come goblins, werewolves and worst of all, the wraiths – “mad specters of rage and power” that can’t be killed by normal means. That’s where you come in, because as the titular Wraithborne, your nameless warrior with a little bit of Thor’s fashion sense has just enough magic about him to take out the bad guys.

To do that, you’ve got to master one of the game’s two control options. The default setting features a virtual thumb stick for movement and buttons for normal attacks, strong attacks and defense. The alternative system is all touch-based, using taps to move and swipes for the offensive moves. Having the two choices is nice, though in practice neither one is quite as precise as you’d like.

Your arsenal gets a big boost from the various kinds of runes you can unlock during your adventure. The runes grant you various kinds of special abilities (area damage, regeneration, etc.), and each one can be upgraded several times using dark crystals dropped by enemies or found by smashing large crystal formations. Runes also make the game’s most clever use of a touchscreen, as you have to trace specific patterns in a short amount of time for them to have the optimal effect.

There aren’t tons of different kinds of enemies, but Wraithborne keeps things from getting too dull by throwing them at you in different patterns and mixing in the occasional very large boss. There’s also a survival mode that pops up every so often where you’ll earn a score based on how long you can last while faced with a never-ending stream of enemies. It’s this mode that will earn you most of the in-game achievements, which you can compare with other players through the iOS Game Center. 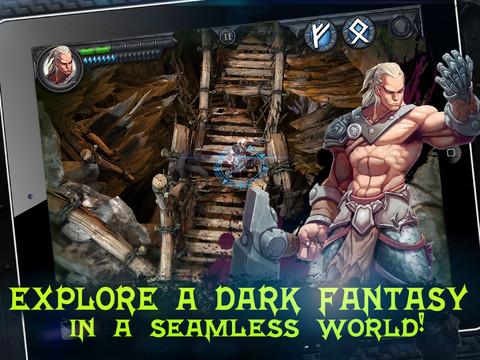 Since the game makes use of Unreal Engine 3, it almost goes without saying that the graphics are impressive. The environments are especially nice, with scenery that almost pops out of the screen without really getting in the way. The downside is that older iOS devices need not apply, and you’ll need an iPhone 4, iPod Touch 5, iPad 2 or something newer to play.

Unlike a lot of similar games, Wraithborne doesn’t have any RPG elements to speak of, so you won’t have to worry about leveling your hammer wielder up. Keeping things simple works for a game that’s as single-minded as this one, but it also means there isn’t a lot of depth here. Once you’ve played through it the entire way, there’s not a lot to keep you coming back for more. It doesn’t help that the game is fairly short, so getting higher scores in the survival mode becomes the lone argument for replay value. 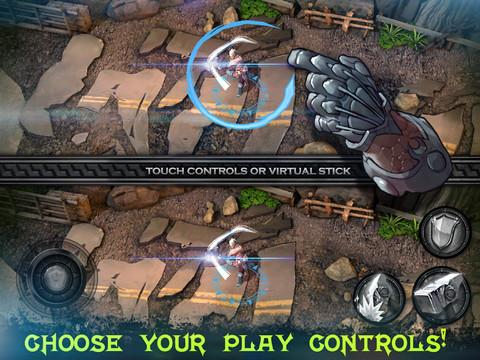 If you just want to spend a few hours smashing monsters with a hammer and unleashing rune magic, Wraithborne can definitely help you out with that. Just keep in mind that it’s probably going to be more a fling than a long term relationship.