Home / Reviews / Woven Review – One for the Youngsters 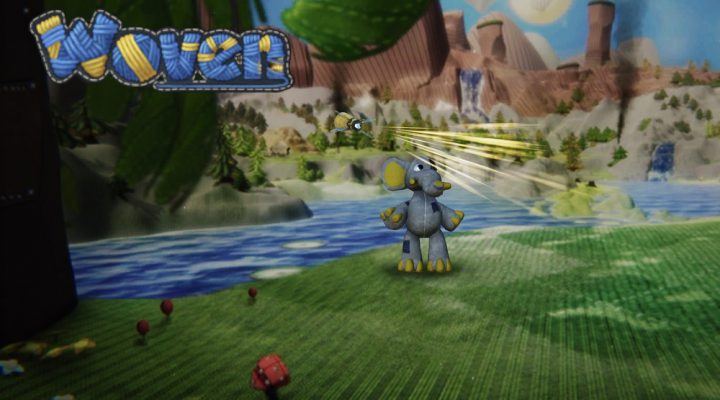 A soft and enticing world

Lots of heart and charm

Not much to do if you're a seasoned gamer

Woven is one of those games that might keep your kids quiet for a couple of hours. It’s simple, it’s bright and you know it isn’t going to drop any F-bombs on them while you’re not looking. Its mix of puzzling and rhyming is pretty solid, but if you’re looking for something to poke more mature brain cells, we’d probably give it a miss.

The game sees you playing as a woollen elephant with a penchant for pretty flowers. After falling down a cliff and getting scared of a cave, you team up with a robotic insect thing and go on some adventures.

Those adventures involve solving simple puzzles, changing your shape to access new powers and listening to some rhyming couplets to push you in the right direction. It’s all very twee, but its heart is in the right place and that’s nothing to sniff at.

The controls see you tapping on the screen to move and swiping to have a look around. There are a bunch of on-screen buttons to poke as well, most of them involving functions that Glitch – the robo-sect – can perform.

He’s a torch, he’s a battery, he can scan things to create knitting patterns. Stuffy, the elephant, can sing to entice birds, amongst other things. You combine these skills to push the story along, discovering more about the wooly land you’re in as you go.

There’s never anything particularly challenging happening, and the game plods along at a sedate but often underwhelming pace. It holds your hand whenever it gets the chance, and if you’re a seasoned puzzle-player that can start to feel pretty darn cloying pretty darn quickly.

Woven is well put together, and there’s a definite charm to everything that it does. But it’s slow and cumbersome and likes to check that you’re okay every couple of minutes. It’s not the sort of thing that’s really going to relax anyone who’s played a wander-puzzler before, because you’ll be a good few steps ahead of it at almost every given second.

But if you’re looking for something wholesome and fuzzy to keep the young ‘uns entertained then you could do a damn sight worse. There are some sensible lessons to learn here, and the head-scratching is more likely to to entice smaller noggins.

Golf Impact Review – Pretty Much a Hole in One