Tons of content, both for single-player fans and multiplayer battles. Superb physics engine with predictable trajectories for weapons and water. New additions, like physics objects and classes, encourage more strategic approaches to levels. Lots of costumes and customizables to make the game your own.

Despite the new additions, still feels very similar to previous 2D Worms games. Response time for controls sometimes delayed after turns. Tutorial levels mostly focus on features new to Revolution, so the learning curve for Worms newcomers will be steep.

The market for tiny, worm-sized army gear is up 35% this year.

Our favorite warfare-waging worms are back in Team17’s latest annelid battle-epic: Worms: Revolution.  Even though worms are usually armless and blind, these soldiers are skilled with the aiming of firearms, tossing of explosives, avoidance of landmines, and much more.  It’s no wonder our slightly sadistic narrator wants to make a nature documentary on their fighting habits.

Fans of the series will find many familiar features as the game returns to its 2D roots following last year’s 3D Worms: Ultimate Mayhem.  Each level pits your band of worm warriors against their opponents in turn-based strategy matches.  Worms will need to shuffle and jump their way around hilly maps filled with potential dangers, like landmines and explosive barrels, in order to take out their enemies in any way possible.  At your disposal are a wide array of weapons, including classics like the bazooka, shotgun, Dragon Ball, holy hand grenade, air strike, and explosive sheep.

Weapons that are new to Worms: Revolution are related to landscape features that are new, as well.  Water has been added to maps, presenting a variety of strategies that can be implemented to deal with its dangers and uses.  Worms that are submerged in water will lose five points of health each turn, and jumping height is reduced while in a pool.  The new “plug hole” item can be used to drain water from an area for any worm that is less than pleased with his soggy fate.  Water can also be used to wash worms into compromised positions, or even straight off the stage to their demise.  For this purpose, the new water gun, water strike (like an air strike, but drops water balloons), and water bombs are all excellent forms of aquatic warfare.

The other new feature visible in almost every map is physics objects: large (but appropriately sized in relation to worms) items that introduce an extra level of strategy to the game.  These items may be blocking a worm or path, but they can also help protect against direct attacks.  Although these can be moved with the new telekinesis power or destroyed with weapons, many physics objects have a related effect once blown up:  lighters explode, mushrooms release poisonous gas, and hip flasks pour water all over the surrounding area, meaning you’ll need to be careful which item you station your soldiers behind. 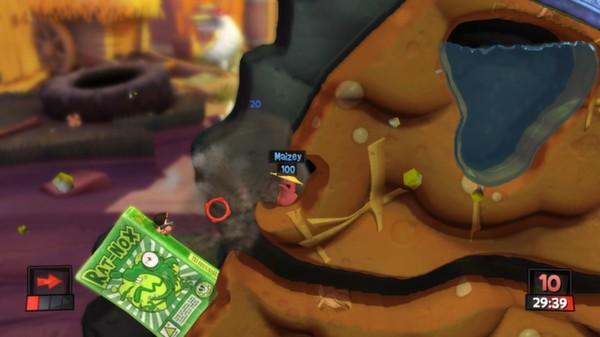 If these additions weren’t enough for la Révolution, there are also three new classes of worm available to take into battle.  The standard, series-familiar worm is still the Soldier, but he is now accompanied by the Heavy, Scientist, and Scout.  The Heavy is much stronger, but extremely slow with a limited jump height.  The Scientist automatically heals your worms for five health points each turn (making him more like a Medic), but he’s fairly weak.  The Scout, my favorite addition, is extremely fast, jumps farther than any other class, and can fit into small paths others can’t—but is the weakest of the group.

With this slew of new features just begging to be enjoyed, Worms: Revolution provides plenty of ways to do so.  Single-player options include a 32-level Campaign in which you’ll battle in classic Worms fashion, with a one-minute timer on turns, and the goal of being the last worm standing.  The Puzzle stages put you in an untimed scenario against non-aggressive enemies, asking that you complete a goal with a very limited assortment of weapons.  And the Farmyard Face-Off Diaries provide a story-like progression, starting you with one worm against four as you free your army buddies from captors and build your squad.  Of course, local and online multiplayer are also present, creating an essentially endless amount of replay value beyond the single-player stages—especially with the ability to completely customize your multiplayer experience, from number of weapons to turn timers to worms’ health.  With a full level editor included, you won’t even have to play the same map twice (if you don’t want). 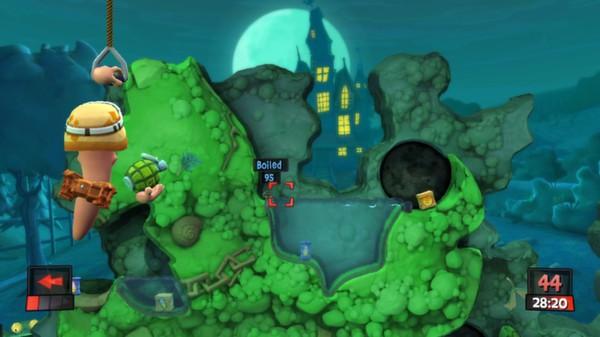 Although the new features and classes are very welcomed, the gameplay in Worms: Revolution is still standard for the series.  Players who didn’t love previous installments likely won’t find anything new here to draw them in.  As someone who has always felt the worms’ movement was too slow, the Scout has greatly enhanced my enjoyment of the game—but in order to unlock additional Scout worms, you have to spend credits.  These credits are earned through completing missions and levels, which means you’ll still have to play a decent amount of standard-Soldier stages while saving up for the new classes.

Of course, this is a minor complaint in an otherwise stellar game that prides itself on its attention to detail and tongue-in-cheek humor.  The “nature documentary” narrator that guides and directs your worms into battle is a fabulous addition, providing mocking advice and meager hope for your battle prospects: “Dying last words should be poignant, like ‘Bye bye’ or ‘Oi, nutter!’,” “I can see you and I grabbing a cup of joe when all this is over, then laughing about how you risked your life and I was never in any immediate danger.  Ha!” and his not-quite-thoughtful renaming of “Deathmatch” to “The My Corpse or Yours Fun Run.”

Worms: Revolution is a fun run, and worth a download from anyone who ever has, or ever expected to, enjoy a Worms title.  Just don’t let PETA get their hands on it.  I doubt the narrator’s requests for a “double worm omelet, hold the mercy” would go over well.  Oh, and all the blown up, drowned, and sheep-exploded worms, I suppose.