Store is difficult to find.

When you stop and think about it, playing golf is a lot like shooting artillery. You have to consider factors like trajectory, firing power, wind speed, as well as hazards like livestock and suicidal groundskeepers. OK, maybe not that last part, but all of these are the types of things you have to account for in Worms Crazy Golf, a surprisingly clever and fun addition to the Worms franchise.

Worms Crazy Golf seamlessly melds the artillery gameplay of prior Worms titles with the often-dull-to-watch sport invented by the Scottish. You control a single Worm who happens to be golfing his or her way across a multitude of courses, many of which are so crazily designed that they would cause Tiger Woods to weep like he would if he’d just lost another sponsorship deal. You select different types of clubs (driver, iron, wedge, or putter), adjust trajectory, and hold down on the swing button to actually take a shot. From there, it’s a matter of releasing when the power meter reaches the point you want (though you should be careful to not to release when it’s in a red section, since those will cause you to biff the shot).

As the game progresses, you start to earn new gear —like a watch that will slow down time or a jet that will bounce the ball a little higher in the air— which will help you navigate the level and/or circumvent the hazards therein. The hazards are a lot of fun, as they can both hinder or help; it just depends on how you encounter them. Case in point: magnets can help carry a ball across an impossible gap (or, you know, cause them to get stuck in a cruddy location) and cranky old women wandering the green will smack the ball as hard as they possibly can should they come into contact with it.

As you’ve probably guessed by now, the tone is goofy and ridiculous and incredibly fun, which is totally in keeping with the Worms series. Additionally, you can customize your Worms by earning gold coins while you play and then purchasing items (including new balls, hats, and more powerful clubs). One of the nicest things about Worms Crazy Golf is that you can’t buy your way to powerful items with real money. Instead, all the in-game gold is earned the old-fashioned way: by playing the game and collecting coins. The only problem with this is that it’s a bit of a pain to figure out how to get to the store in the first place, as it isn’t really labeled and there are no instructions showing you how to do so.

There’s a huge amount of content to play through, too. Currently, there are four different courses with eighteen holes on each. Aside from the standard single player campaign, a series of challenge maps with specific goals occasionally pop up between levels (it’s particularly fun to see how quickly you can cause sheep to explode when you hit them with a shot), and there’s also a turn-based multiplayer mode that requires mobile players to switch the device between one another. 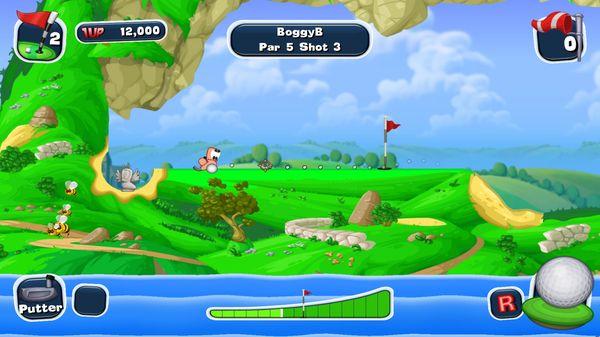 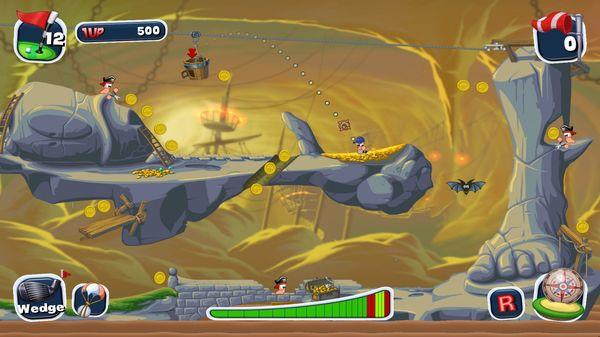 The production values in Worms Crazy Golf are top-notch, as always. Honestly, the only way they’d be noteworthy is if they were anything less than great. Team 17’s got a near perfect record when it comes to inserting high-quality cartoon graphics and goofy sound effects/dialogue into the Worms titles, and they’re here in full effect. Each of the golf courses looks totally different, including settings like the British countryside and a pirate sanctuary, and they’re all beautifully detailed.

Worms Crazy Golf is, literally, a blast. It’s a great spin (pun intended) on both artillery and golf titles, blending both genres together to create something that’s new and different. More importantly, though, it’s both addictive and fun, and you really can’t ask for much more than that when it comes to video games.