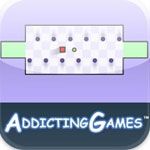 World’s Hardest Game is an iPhone app that actually lives up to its title. The idea is simple, the mechanics are easy, but trying to accomplish anything is mind-numbingly difficult. That’s not to say the game is bad – in fact it accomplishes exactly what it sets out to do. World’s Hardest Game offers up an easy-to-learn game that will make your blood boil in its first five minutes.
Like any good challenge the idea behind World’s Hardest Game is simple. You’ll control a red square that you’ll need to move to an exit. Standing between you and the exit are deadly blue circles that move fast. If you can manage to get past these indigo spheres of death you won’t be able to use the exit unless you collect all of the yellow circles on the map – yellow circles that (surprise surprise) like to hang out near the kill-happy blue circles.
Right from the first level the game is harder than you might ever expect. Even if you think you’re getting the hang of this in a few levels, you’ll quickly be stopped dead in your tracks by something so difficult it could not possibly have been conceived by a human mind. Don’t believe us? We died 116 times on the sixth stage. To put that into perspective, there are 30 stages in total. We barely made it one fifth of the way into the game before we hit the wall, and the game won’t even look at your score unless you get through all 30.
There are a few little tricks that can help you out, but they’re not going to help you out drastically. After a few dozen deaths you’ll realize that you can control your red dot from anywhere on the screen. This means you won’t have to have your finger over the little devil, so you can see where he’s moving instead of having the view of his surroundings obscured by your finger. Other tricks, like knowing the safest places to line up when spinning blue death is near, will come the more you play.
The presentation in World’s Hardest Game is simple, but not without reason. In a game that requires split second timing and razor sharp reactions the last thing you need is distractions. In fact it’s pretty hard to find fault in anything about World’s Hardest Game.
The overly simple graphics and blisteringly difficult level design all serve a purpose, helping to work towards the end goal. Each level starts with a message from the game taunting you, sometimes even being a tad crude. The whole presentation serves to remind you that you’re simply not good enough to play this game, and that’s exactly what this game needed. The only real dilemma that World’s Hardest Game faces is that it simply isn’t going to be for everybody.
World’s Hardest Game is a title for a niche audience. It’s for the type of gamer that plays everything on the hardest difficulty. The type of gamer obsessed with perfection. But for the average gamer with an iPhone in their pocket? The difficulty in World’s Hardest Game is just too crippling to be any fun. Kudos for the team at Addicting Games for bringing a title with such superbly difficult level design to the forefront – it’s just a shame that the game’s strongest characteristic is also the reason so few will want to check it out.