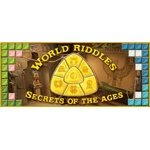 World Riddles: Secrets of the Ages suffers from a lack of variety

World Riddles is back to take us around the globe once more, this time discovering the locations of the seven great civilizations of the past through a series of puzzles and historical facts.

Unfortunately, it isn’t such a thrilling ride this time around. This is partially due to how stale the formula now feels, but also the lack of variety in puzzle types that past World Riddles games have seen. It’s still a moderately fun timewaster, but if you’ve already played the other titles in this series, Secrets of the Ages is definitely going to feel very lacking in comparison.

Secrets of the Ages first jets us off to Egypt, where we participate in a light spot of tile sliding, before moving on to the more meaty Picross challenges. For those unfamiliar with Picross, you’re provided with a grid on which you must remove spaces to uncover a picture underneath.

Numbers above and to the side of the grid let you know how many spaces need uncovering in each row and column. It starts off quite simple, with small grids and easy-to-uncover pictures, but eventually it becomes devilishly difficult. Levels can take up to a good twenty minutes to complete at times, as you slowly but surely pick away at the edges.

As you complete these Picross challenges, you’re rewarded gold coins based on how well you took to the task. Efficiency and speed, plus a minor number of mistakes on your part, lead to bigger rewards, and these can then be used to restore items in each area to their former glory. In Egypt, for example, you can give a sarcophagus a fix up. As you do so, tidbits of information are given about each restoration.

While these Picross puzzles are entertaining enough, they soon become rather dull as you do the same thing over and over again. Unlike past World Riddles games, these are the only puzzles available, with no variety present at all.

It also becomes apparent very early on that restoring these items in each area is ultimately pointless and a trick to make you feel like you’re doing more than simply playing Picross. Even when you manage to restore all the monuments, the game simply forces you to play the rest of the available Picross grids anyway, no matter than your work is technically already done.

There are bonus Picross levels that are separate from the main story, but these do little to address the overall lack of variety. Picross fanatics will certainly get their fix, but compared to past titles in the series Secrets of the Ages can’t help but feel like a bit of a disappointment.