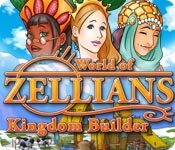 Many of the kings and queens who appear in World of Zellians: Kingdom Builder display patently poor judgment when it comes to cultivating their realms (much like some of our own leaders, oddly enough). Good thing we’re here to keep them on the straight and narrow. As travelling city architects players construct the houses, shops, farms, and community facilities each town needs to safely grow and prosper in this routine but still satisfying city builder.

The narrative centers around a young city planner (you – there is no onscreen avatar) who travels around the world helping monarchs enhance their towns, build up their economies, and initiate trading between nations.

You begin as a student of illustrious city planner Zorm. He seems nice enough at first, but it isn’t long before your city planning skills surpass his, at which point he grows jealous and spiteful. Once you begin traveling on your own and holding meetings with royalty without him he actively tries to sabotage your efforts by setting fire to your buildings and conjuring up "madmen" who like nothing more than to run around in berserk fits destroying bits of your city.

Players with even a modicum of familiarity with city builders will require little instruction to play. Each level begins with a monologue from a ruler who has some specific requirements of a town-like, say, turning it into a tourist hotspot by offering up a diverse selection of ice creams-before setting players free to create the buildings necessary to support these goals.

Most buildings take mere seconds to construct, but almost all have multiple prerequisites. Ice cream parlors, for example, require orchards and dairy farms, and these buildings in turn have their own requirements, such as grain fields, water wells, and specific population levels. All buildings require an investment of gold and material, both of which are generated at varying rates by certain buildings.

More new building types with ever more complicated conditions are unveiled over the course of the game’s 45 missions. Some of the highest level buildings, such as hospitals – which are necessary to lock away those bedeviling madmen mentioned earlier – require the construction of more than a dozen other buildings before players are permitted to break ground on them.

Complicating matters further, players need to ensure that they can accommodate all of the required buildings on smallish countryside maps, which are littered with many immovable obstacles, including streams, ruins, and trees. Each building has its own particular shape and orientation, which means players need to slot them together like puzzle pieces between these obstacles, ensuring each is connected to a town road, to conserve space.

All of these conditions might make World of Zellians sound convoluted and difficult, but it really isn’t. The learning curve is extremely shallow; players’ hands are held through the construction of each new building at the start and all you have to do to check a structure’s requirements is hover your mouse over its icon in the building menu at the bottom of the screen.

In fact, my biggest criticism of the game is that it’s a bit too easy. There’s no risk of losing. We have infinite time, continually regenerating resources, and unlimited do-overs via one-click building demolition. Fires, madmen, and other factors act as progress impediments, but these are momentary setbacks that never lead to all-out failure. All it takes to win is patience and a bit of strategy.

I was also disappointed that my performance was never graded. There’s no motivation to be efficient or to pay attention to how our little citizens are moving about town. A simple post-level report card letting us know how much land we conserved, how quickly we finished, and how satisfied citizens were with our design based on a few simple criteria would have added a new dimension to the game, making it a bit meatier for veteran players and increasing its replay value without having any impact on the accessible rookie experience.

Still, it’s a fun play. And difficulty and experience level are irrelevant when it comes to appreciating the artistry that went into the game’s amusingly animated people and dynamic structures. Make sure to take the time to watch your apple orchards blossom and your barrel-toting firemen race to the scene of a blaze.

The pretty scenery combined with World of Zellians‘ easy-but-entertaining strategy play is enough to warrant, at the very least, giving the demo a go.