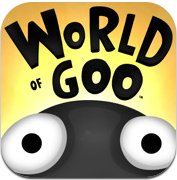 Every now and again, when you boot up a game, you can just tell it’s going to be special. It’s hard to put your finger on it, but after that first click of the mouse it’s there. You’re hooked, and you know that you’re playing a rare gem of a game. World of Goo is one of those games.

World of Goo‘s developer, 2D Boy, came out of nowhere with this, their very first title. Crafted by a truly skeleton team of four extremely talented guys, World of Goo has piles of polish, perplexing puzzles, countless character and some of the wittiest writing in a game to date.

The basic premise is to stick balls of goo together to form structures to help other balls get sucked up by escape pipes in each level. Every stage has a minimum number of balls that must be saved. Beat a stage to unlock the subsequent stage on the world map. There are four worlds, an epilogue and loads of hidden secrets.

The gameplay revolves around the movement of the goo using a realistic physics engine. Basically, if you build a tall tower but it’s windy, the gooey structure will wobble, and potentially collapse unless you’ve sufficiently built up the base. There are several types of goo. Regular black or white goo will latch itself into triangular trusses. Watery goo can only be linked at one point to form a chain. Green goo acts like regular goo, but can be removed even after it has formed a structure. Watch where you remove it, or the structure could fall apart! There are other helpful devices, like pink balloons that help you float the chain. The more balloons you attach, the higher the chain will float, and the more weight it will take to bring it down.

You can probably begin to imagine some puzzles based upon this description, but I guarantee you that you couldn’t imagine them like the developers did. Each level begins with a brief cutscene showing you the basic outline of the level, then you’re on your own. There is no time limit, so all you have to do is experiment. Sometimes you’re tasked with building a bridge. Other times, you have to form a telephone line across a chasm at sunset in the wind while rolling a giant head using balloons to ensure the whole thing doesn’t crash into the pit. It takes a lot of ingenuity to figure out these puzzles, but once you get the hang of it, and start thinking outside the box and inside the goo (ew…) each puzzle makes perfect sense.

Guiding you through the World of Goo is the unseen Sign Painter. Ever wonder how those signs in adventure titles just happen to appear at just the right moment, containing just the right information just as you happened to need it? Well, it’s finally been explained. These signs, along with the occasional cutscene, help move the story forward. The writing is very self-aware, and knows its audience. For example, one level has a mechanical frog named Fisty as one of the obstacles. The Sign Painter’s take? “Fisty swore he would never be one of those tadpoles that grows up and shoots colored gems out of their mouths. But he wondered what it might be like.” If you’ve played the popular game Zuma, you’ll be in on the joke.

Graphically, World of  Goo‘s style is a combination between Tim Burton and Dr. Seuss. Equal parts dark and mesmerizing, each level has its own unique design; no two levels look the same. There are many beautiful graphical touches, such as a large Corpse Bride type character who has to have her arm manipulated by floating goo. The game is richly detailed, with smooth animation and a multitude of subtle effects and shading to really help bring the world to life. The music is equally stunning. Like the graphics, it switches between foreboding and whimsical. It is lush and beautiful, with Danny Elfman-esque overtones. If you’ve watched the movie Edward Scissorhands, you’ll get an idea of what it sounds like.

There is a downside to World of Goo: it is quite difficult. Some of the puzzles are very complex and require a lot of thinking, along with some precise execution. Only the most hardcore puzzle fans will be able to make their way through without a strategy guide or forum help. Usually, the level’s name and descriptor will give you a clue as to how to form the solution, but there are no actual tutorials in the game, so the learning curve can be a bit steep. (Thankfully, you’re given some “skips” to skip over a particularly troublesome level.)

But don’t let that scare you away, because World of Goo is one of the best games of the year. It’s so rare that a game does so much right. Publisher Brighter Minds should be lauded for distributing such an off-beat independent game, and 2D Boy has instantly earned itself a huge fanbase. Whatever you do, don’t miss the Goo.