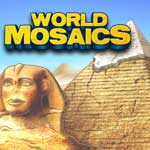 Tag along on a series of archaeological expeditions in World Mosaics, a puzzle game that cleverly combines elements of Sudoku and the Windows PC game Minesweeper. Using your trusty brush and shovel, you’ll carefully uncover mysterious mosaics that serve as the key to discovering the origins of an ancient civilization known as the Sea People.

Each level consists of a sand-covered grid with numbers along the left and the top. The mosaic is concealed somewhere underneath, and to find the exact location of the pieces you’ll have to "dust" off squares of sand one by one. The numbers are the key to figuring out where to dust. Each number refers to the consecutive mosaic tiles in a given row or column; for example, a "4" means that somewhere in that row there will be a series of four connected tiles. A "3 4 2" means that there will be a set of three, a set of four and a set of two tiles in that particular row, all separated by at least one space.

Using this information, you can left-click the mouse to dust off the appropriate squares and reveal the mosaic tiles below, and right-click to use your shovel to dig holes in the empty spaces (much like marking up a Minesweeper board with flags to mark the locations of mines).

As you complete rows and columns, the numbers will get crossed off until the entire mosaic has been revealed. If you make too many mistakes though, i.e. try to dig a space that is actually part of the mosaic, the entire mosaic will shatter and you’ll have to start over.

Uncovering tiles will fill a meter that grants you the occasional hint; when used, it will reveal a few spaces on the board. These hints come in handy later in the game as the difficulty gradually increases. You’ll start with small 5×5 grids, but they increase in size over the course of the game, and the patterns themselves get more challenging – such as the irregularly-shaped Asian kanji characters in Japan.

There are seven locations and 99 puzzles in story mode, and each mosaic pertains to the location in some way so that you’ll get a healthy dose of cultural factoids with each new completed puzzle. While digging near the ruins of the Parthenon in Greece, for example, you’ll collect symbols that represent the various Greek gods, like a sword for the war-god Ares, and a fiery hammer to represent Hephaestus, god of the forge. An extras mode offers additional puzzles in a variety of themes, such as electronics.

It might take players a few puzzles before they’ve completely wrapped their heads around World Mosaics. Admittedly, seeing giant strings of 1’s and 2’s can seem intimidating at first, and cancelling moves involves awkwardly holding down two mouse buttons at the same time. But once the basic concepts have been mastered, you’ll find a game that’s just as compelling as Sudoku with plenty of nuances and gameplay strategies to discover – and levels are not timed, so you can take as long as you like.