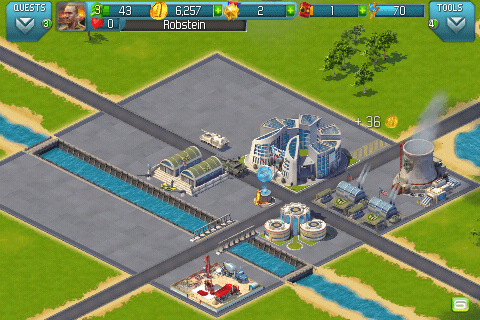 Free-to-play warfare has never been so active

Most iOS armchair generals should be rather intimate with the intricacies of building their own army and base within a freemium model at this point. With Gameloft throwing its helmet into the ring once again, it would be understandable to simply expect more of the same. To a degree it is, but World at Arms adds more than just a spit n’ polish to a common formula; it also adds some much needed interactivity.

An “evil” alliance known as the KRA is threatening the free world, and it’s up to you to put a stop to it. Never mind the kitschy “us versus them” conflict where America is the pinnacle of human achievement and prosperity, or the Kim Jong-il stand-in portrayed as the leader of the KRA (although that is kind of messed up) – the whys aren’t important. What’s important is that we spend every ounce of our free time improving our bases, training soldiers, manufacturing vehicles, and Laying the Smacketh Down.

Every structure in the base serves a purpose. Some buildings train soldiers or can build vehicles and aircraft, others produce money that can be collected after a set amount of real time passes, some refine fuel that allows players to go on missions, and still others generate power essential to constructing more buildings. It’s important to make the most of all of them, since battles can be rather brutal. Between random hazards that need to be tapped or swiped to prevent massive damage and the expected hits taken by an enemy unwilling to submit, it’s entirely possible to finish a fight with only one or two units left. And so the cycle of gathering, training, and constructing continues.

What I find so miraculous about World at Arms is that it always provides me with something to do. Cash is produced at a fairly steady pace that lends itself to almost constant unit production or base expansion. Missions are assigned at a decent clip and range from “build X” to “repair a friend’s base” and so on. Individual vehicles that meander around the base can also be inspected (i.e. tapped) and will drop the occasional coin or experience. Even the combat keeps players consistently busy. All manner of hazards will appear amidst the gunfire and will need to be tapped or swiped to take them out before they flat out destroy a given unit. Conversely, hazards will also appear on the enemy’s side and can be similarly interacted with in order to hit them where it counts. 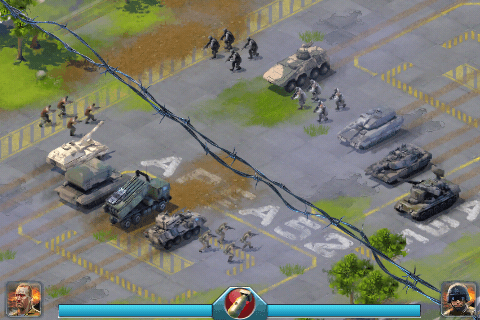 World at Arms brings a fair amount of refinement and actual entertainment to the table, but it’s not without its own set of flaws. Specifically there are a number of elements that aren’t covered very well in the tutorial, leading players to try and deduce why they can’t build or train something on their own. It doesn’t help that the icon for the coins and for the special in-app purchase cash (medals of some kind) look incredibly similar. It took me a few minutes to realize that the reason I couldn’t build the Elite Barracks was because it required medals and not coins. It can also be fairly irritating to lose units in a fight because the tap or swipe gesture required to clear a hazard didn’t register.

I’ll be honest here; I’ve been incredibly impressed with Gameloft’s recent free releases. World at Arms is no exception. It takes the concepts found in more typical base builders, speeds things up a bit, and tosses in a wealth of interactive elements to make something that feels more like a game and less like ticking a few boxes and waiting. It’s one of only a few free-to-play games I’ve encountered that doesn’t drop players into one of those “nothing to do” situations, and I couldn’t be happier about that.